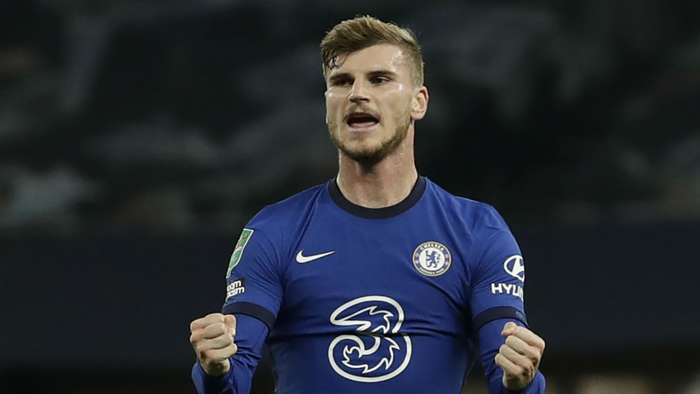 Timo Werner is not interested in leaving Chelsea after only a season, despite his first-year struggles at Stamford Bridge.

The 25-year-old has only scored 10 goals in 39 games for the Blues since his £47.5 million ($67m) move from RB Leipzig lastsummer, and that hasled to speculation that the Germany international is ready to leave.

But Goal has been told that the explosive forward remains confident about turning around his fortunes, with compatriot Thomas Tuchel now manager following Frank Lampards exit in January.

Werners first goal for Chelsea came against Tottenham in the Carabao Cup in late September and his maiden Premier League goal arrived the following month when he netted twice in a 3-3 draw with Southampton.

However, following a run of scoring in five consecutive games for club and country, Werner has scored just twice in his last 30 appearances for Chelsea and Germany.

He scored against League Two side Morecambe in the FA Cup in January, and then against Newcastle in the league in February.

"Timo is clearly one of these guys who has always scored a huge amount of goals and defined himself as the guy who has the last touch on the field. This is a very unique character and position. It is a sensitive position," Tuchel said when he last addressed the issue two weeks ago.

"I believe it is not important who is coaching them to shape their goalscoring mentality but we are here to help everybody and at the moment for us it is important to keep them focused on the process and help them.

"It is not just to look at the result, whether the ball is in or not in, it is the process that matters and it can help you escape the pressure that they put on themselves. They should ask themselves is my decision making good, is my technique good, is my vision clear enough.

"If you focus on these points, hit the ball well and the result will take care of itself. That means you will find the back of the net soon. If you hit the ball, close your eyes and hope for the love of God, then thats what we try to implement and help.

"Of course, we have some exercises in training for finishing but it is clear you can train, show videos but, in the end, a striker just has to score. Thats what you need for confidence and theres no substitute for that."

Werners problems only add to a general issue at Chelsea with a host of forwards, including Kai Havertz and Christian Pulisic, out of form.

However, Werner has produced assists, with 10 provided to his team-mates so far this season, leading him to top the clubs charts in all competitions for goal involvements.

Tuchel has also hinted that the coaching staff will add to Werners game, with Chelseas possession football not allowing him space to run in behind opposition defences.

"Maybe it is our fault because we have a lot of possession and we push opponent teams very, very deep in their half so spaces are not too big," Tuchel said last month.

"The biggest strength of Timo is to attack the space behind the last line so it is maybe also our fault in the dominant game that we play in the moment, it is very natural that the spaces are closed by the opponents."

Chelsea continue to target a new striker in the summer, with Borussia Dortmunds Erling Haaland topping the shortlist, despite the reluctance of the Bundesliga side to sell him.