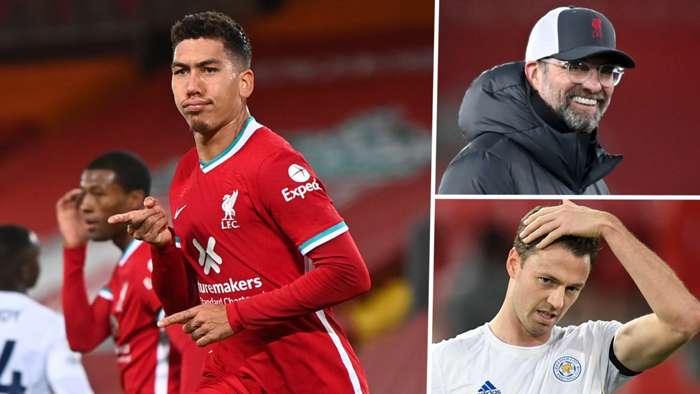 Jurgen Klopp’s men, it seems, are nowhere near ready to surrender their position as English football’s top dogs.

The Reds may have an injury list longer than any in recent memory, but they shrugged that off in impressive fashion, beating Leicester City 3-0 at Anfield to move level on points with Tottenham at the top of the table.

It means they set a new club record in the process. They are now 64 games unbeaten in the league on home soil, a run which, remarkably, stretches back to April 2017 – a world of fans in stadiums, of Sam Allardyce and Christian Benteke celebrating, a world where the idea of a Liverpool title challenge was still some way off.

They arethinking about the title now, that isfor sure. This was a win which will send a message to the challengers.

If you are coming for the crown, you best be ready for the fight of your life.

This, remember, was a side without three of its first-choice back four, with its captain sidelined and its top scorer isolating after testing positive for coronavirus. No Virgil van Dijk, no Joe Gomez, no Trent Alexander-Arnold, no Jordan Henderson, no Mohamed Salah.

And they were facing a team that many had talked of as contenders, a team which had already beaten Manchester City and Arsenal on the road, which had wiped the floor with Leeds United and which had started the weekend on top of the Premier League.

Leicester, though, barely laid a glove on the champions. Beaten twice by the Reds last season, Brendan Rodgers’ men were put in their place once more here.

The bulk of the damage was done in the first half, which Liverpool dominated from the word go andwere rewarded for through a Jonny Evans own goal, and a superbly-crafted second courtesy of Diogo Jota.

Jota, bright, slick and dangerous, continues to impress. The Portugalinternational has now scored in all four of his home league appearances for the club, the first player in Reds history to manage such a feat. As several pointed out, he has scored more home goals this season than Manchester United.

He was the Man of the Match here, but he had plenty of competition. Klopp had asked for players to step up in the absence of so many stars. His wish was granted, and then some.

Jota led the way, but how pleasing it will have been for Klopp to see Curtis Jones, for example, performing so admirably in midfield. This was only the 19-year-old’s third Premier League start, but he looked like he hadbeen there all his life.

Confident, robust and tactically perfect, he certainly outshone another England hopeful, James Maddison, on the opposition.

Jones, for sure, is the future, but he was matched in his excellence by Liverpool’s elder statesman. James Milner turns 35 in January, but you wouldnever know it watching this.

He started at right-back and finished in midfield, his corners creating two of the Reds’ three goals;his experience, nous and quality setting the tone for this patched-up XI. What a player he has been, and continues to be, for Klopp.

Of course, this being Liverpool there was still another injury to contend with. Naby Keita had been excellent on his return to the side, but his evening was to be cut short by what looked like a hamstring issue early in the second half. At least he will have plenty of company in the treatment room...

Liverpool, though, overcame that blow as they have overcome all the others. They extended their lead through Roberto Firmino late on - a welcome goal for the Brazilian, who turned in a much-improved performance himself.

Maybe one day we will learn, eh? Write off Liverpool at your peril. The names may change, but the story does not