Where is Megan Rapinoe? How the USWNT star followed 2019 accolades with 2020 crusades 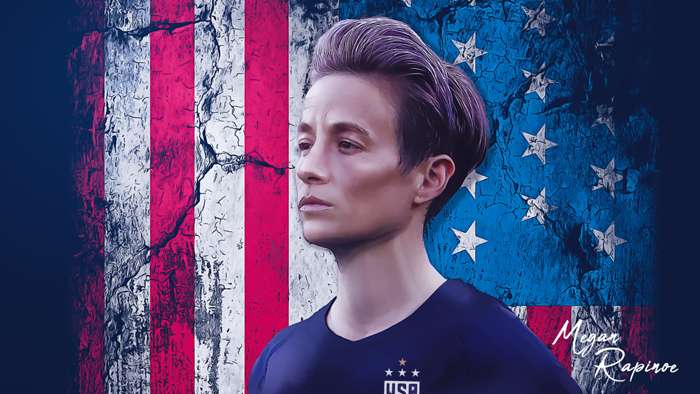 Outside of women’s soccer, Megan Rapinoe was notthe icon she is today before 2019.

After being a leading figure in her sport for years, last summer she exploded into the mainstream media within weeks.

Amid a very public feud with the president of the United States, Donald Trump, the winger helped the U.S. women's national teamto a second successive World Cup triumph, her goal in the final one of six across the tournament – a Golden Boot-winning total.

While continuing to divide opinion for her outspoken nature, Rapinoe collected the Ballon d’Or and a whole host of other individual awards to cap a year where the media’s attention on her swelled like never before.

However, as 2020 comes to a close and those individual accolades are ready to be dished out again, she is not in the conversation.

Winner of Goal 50 last year, the 35-year-old doesn’t even make the list this time around.

For an athlete who has long been about more than just the sport she loves though, that in itself is telling of who she is.

It was March 11 when Rapinoe last stepped foot on the pitch. With seven minutes on the clock, she thundered a free-kick from 25 yards into the top corner to put the United States ahead against Japan, and on their way to winning the SheBelieves Cup.

Since then, soccer has been put on hold. Rapinoe opted out of playing for her club, OL Reign, when the NWSL organized the Challenge Cup in July, after the regular season was unable to go ahead. She also decided not to play in the Fall Series in September.

Instead, in a year which has seen a number of politicians tell athletes to stick to their sport, Rapinoe has been using her voice to draw attention to issues that have taken huge precedence in 2020.

From stressing the importance of a fair vote in this year’s presidential election, to supporting the Black Lives Matter movement and continuing to fight against all forms of discrimination, she has been pushing a number of significant messages to her millions of followers.

She has had a huge impact while doing so, too.

Fair Count is an organization that fights to achieve a fair and accurate census in Georgia and around the United States.

Their message was especially important in an election year – even more so in hindsight, with Trump calling several times for all counting of votes to stop – and founder Stacey Abrams was just one of many important figures that Rapinoe used her platform to amplify.

“She did an online programme called Ask Stacey, where we talked about the census,” Rebecca DeHart, CEO of Fair Count, tells Goal.

“We were able to use some of those videos for online digital advertising and we got some of the best click throughs, where folks went the next step and learned about the census afterwards, from using her and other people that were part of that programme.

“Also, while we won't get full census numbers yet, we do know that we did better than we did in 2010 in Georgia, and that is really exciting,” she added, speaking just before the recent election.

“In all the seven states in the southeast part of the United States, only three improved their 2010 census counts and it was really great that we were one of them.”

Georgia was one of the crucial swing states in the 2020 U.S. election and, pending a recount, Trump's defeat there has helped to seal his fate as a one-term president.

Patrisse Cullors-Brignac, co-founder of the Black Lives Matter movement, and Joe Biden, the U.S.president-elect, were other guests on the winger’s Instagram, while she also hosted a show on HBO called Seeing America, with Alexandria Ocasio-Cortez, the youngest woman ever to serve in the United States Congress, among those involved.

It was not just high-profile names she lifted up on her platform, either. As part of the Movement for Black Lives’ #ShareTheMicNow campaign, Rapinoe was one of many white women with huge followings who leant their social accounts to black women.

Fresco Steez, a cultural curator and creative strategist, took over Rapinoe’s account, sharing imperative messages of anti-racism to over two million people. Steez has 6,000 followers on her own Instagram account. “This is the voice we need to follow,” Rapinoe wrote.

This activism is notanything new. She is not just jumping onto the bandwagon and pretending to care.

When NFL quarterback Colin Kaepernick kneeled during the American national anthem back in 2016 - protesting against racial injustice, police brutality and systematic oppression - Rapinoe was among the first athletes to support him.

As a result, U.S. Soccer created a policy that required all players to stand "respectfully" during the anthem, making it the first league or governing body to do so.

“It was a little nod to Kaepernick and everything that he’s standing for right now,” she said at the time, explaining her decision to kneel.

“I think it’s actually pretty disgusting the way he was treated and the way that a lot of the media has covered it and made it about something that it absolutely isn’t.

“We need to have a more thoughtful, two-sided conversation about racial issues in this country.”

People like Rapinoe pushing these messages, to a different audience than the usual streams, can help change attitudes and open the eyes of those who do notsee these issues or believe they do notimpact them.

“The census is not the sexiest thing. When we're able to break out of that frame of nerdiness and talk about what it really means and how everyone is equally affected by it, that just really helps bolster our message,” DeHart explained.

“Megan is the true 'see something, say something' type of person and I admire her so much for that. She has a moral compass that points true north.

“When she partnered with us on the census, she understood that if people didn't get counted, if they were either scared of participating or didn't trust participating, she knew what was at stake.

“She knew then that it would be very hard for them to be seen and heard for the next decade.”

The sad thing is that Rapinoe remains in the minority when it comes to elite soccer stars speaking out.

“They could do so much if they decided to use their stupendous level of popularity to fight racism, for example,” she told L’Equipe Mag recently, speaking about stars such asLionel Messi and Cristiano Ronaldo.

“Lewis Hamilton's willingness to speak out is incredible, not to mention LeBron James, as they are at the centre of colossal economic powers.

“Naomi Osaka, who at the US Open wore masks with the names of black people killed by U.S. police, like Breonna Taylor and George Floyd. In the middle of the tennis world, which is so white!

“These athletes inspire me. There is like an invisible thread between us. We must not be shy.”

Last year, when Rapinoe took to the stage at the FIFA Best Awards, having been named best women's player for 2019, she said: “Lend your platform to other people, share your success.”

One year on, she is notin contention to retain that award, or any she collected 12 months ago, such has been her lack of impact on the pitch throughout 2020. However, away from soccer, it has been more of the same from the two-time World Cup winner.