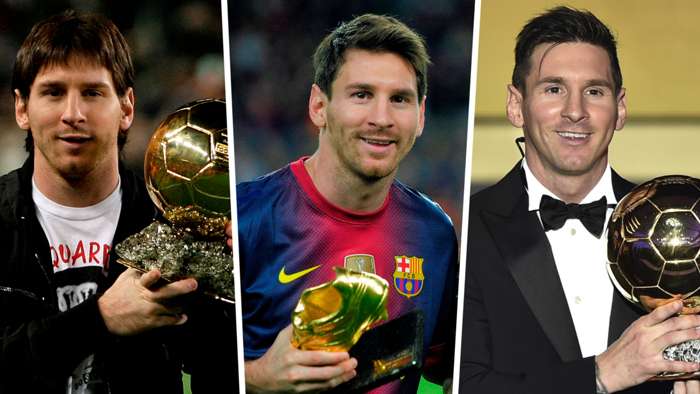 Lionel Messi has been at Barcelona for the entirety of his professional career and the Argentine has produced so many brilliant moments for the club during that time.

He continues to createso many happy memories for the fans, butwhich seasons have been his best in the Blaugrana?

Goal takes a look at Messi's five best seasons with the club.

Pep Guardiola's second season in charge of Barcelona saw Messi continue to grow as the club's talisman as he led the team to four trophies, including La Liga and the Club World Cup.

Barca's 2009 triumphs in the Supercopa de Espana, UEFA Super Cup and Club World Cup brought their trophy-haul for the calendar year to a record six, on top of the previous season's La Liga, Copa del Rey and Champions League.

Messi came to the fore on all fronts and he was involved in a total of 58 goals (47 goals - a then career-high -and 11 assists), clinching the European Golden Shoe in the process. His record in La Liga was 34 goals in 35 appearances.

He did finish as the top scorer in the 2009-10 Champions League with eight strikes (though four came in one match against Arsenal in the quarter-final), but was powerless to prevent Jose Mourinho's relentless Inter from dumping Barca out in the semi-final.

The 2011-12 season was certainly one of Messi's best, but mainly from an individualistic sense, since it was somewhat of a disappointment for Barcelona, even though they won four trophies.

Barca were denied four-in-a-row in La Liga as Mourinho's Real Madrid dominated the division, sweeping to glory with a final tally of 100 points. They did beat Madrid at the beginning of the season in the Supercopa de Espana, with Messi pulling the strings by scoring three goals in the 5-4 aggregate triumph.

As well as missing out on Liga title, Barca fell short in the Champions League, losing narrowly in the semi-final against Chelsea, with Messi even missing a penalty.

Nevertheless, while that penalty miss haunted him, Messi finished the season witha remarkable73 goals in 60 appearances for Barca across all competitions, including a record 50 in La Liga and 14 in the Champions League. In addition to his 73 goals, the Argentine supplied assists for 29 more, meaning he was directly involved in a total of 102 goals in the campaign.

The 2008-09 season is widely acknowledged as the campaign when Messi became the main man at Barcelona.Despite being just 21, his genius helped propel them to a treble as they wonLa Liga, the Copa del Rey and the Champions League.

It was Guardiola's first season at the helm and the Catalan side cruised to La Liga glory. Crucially, they defeatedReal Madrid twice in the two league Clasico meetings,including a 6-2 win at the Santiago Bernabeu,with Messi scoring in each game.

Messi found the net in the Copa del Rey final hammering of Athletic Club and he also pulled strings in the Champions League final against a Manchester United featuring Cristiano Ronaldo. As well as playing a part in Samuel Eto'o's opening goal, Messi rose above Rio Ferdinand to head beyond Edwin van der Sar to wrap things up for Barca in the 2-0 win.

Having missed the 2006 final victory, the 2009 Champions League triumph was the first true taste of the European Cup for the Argentine, who had shone brightest in a team containing Eto'o, Xavi, Andres Iniesta andThierry Henry.

The end of 2009 saw Messi scoop his first ever Ballon d'Or and he won the prestigious award by what was then a record margin over second-placed Ronaldo.

Messi recovered spectacularly from his 2014 World Cup final loss with Argentina to star in one of his best ever seasons for Barcelona as he clinched a second treble and became the all-time top scorer in La Liga.

Having seen their Liga dominance challenged by Real Madrid and Diego Simeone's hard-working Atletico Madrid, Messi and Barca stepped up a gear in 2014-15 to ensure the title was theirs.

The league was incredibly tight and getting their hands on the title relied heavily on late-season results against Real and Atletico. Messi rose to the occasion by supplying assists for Mathieu and Suarez, whose goals secured three points against Real, while he struckthe only goal of the game against Atleti in May. In the end, Barca won the league by two points.

Messi also dominated the Copa del Rey final against Athletic Club, scoring twice in a 3-1 victory, and, while he was not as decisive in front of goal in the Champions League final win over Juventus, he was still key.

His goal tally for the season was 58 and he assisted a further 27, taking the total of goals he was involved in to 85.

The Guardiola era at Barcelona got into its groove in 2010-11 and Messi was central to the continuation of the success they had achieved the previous two seasons.

He scored 53 goals and assisted 21in all during the campaign. His tally for the season included31 goals in La Liga as Barca finished four points ahead of Real Madrid to get their hands ontheir third league crownin a row.

While they may have lost the Copa del Rey final to Real Madrid in 2011, they did overcome their Clasico rivals in the semi-finals of the Champions League en route to lifting the trophy. Messi totally dismantled Real in the first leg of the encounter at the Santiago Bernabeu, scoring twice.

The Argentine was then central to a dominant display in the final against Manchester United, scoring - just as he had two years before in the 2009 triumphagainst the Red Devils - in a 3-1 win.