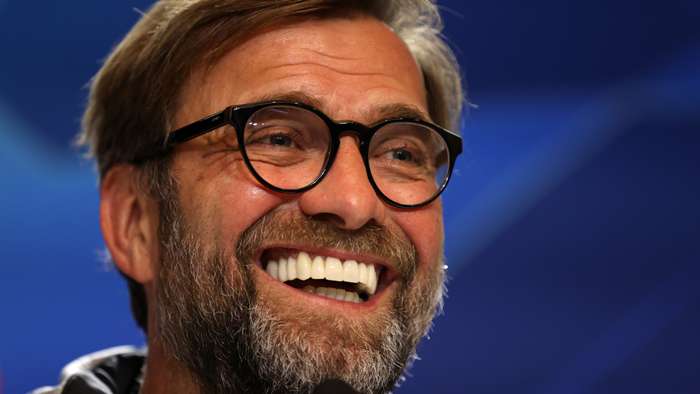 Jurgen Klopp has overseen a number of makeovers during his career, having revived the fortunes of Borussia Dortmund before bringing Liverpool back to the summit of English and European football.

Klopp is not averse to personal makeovers either, admitting to getting a hair transplant in 2013 and anyone who has been paying attention will have noticed that his smile is brighter since arriving on Merseyside.

So who is the mastermind behind the German coach'sinimitable smile? Goal brings you all you need to know.

Dr Robbie Hughes is Jurgen Klopp's dentist and is responsible for the German's new look.Dr Hughes owns the Dental Excellence practice, which is based in Liverpool.

In a 2019 interview with BBC Sport, Hughes said that Klopp got in touch with the Dental Excellence team after seeing the work they had done with Roberto Firmino's teeth.

"Working with Jurgen Klopp came about because he saw Roberto's new teeth and decided he wanted to do something," Hughes said.

"When Jurgen came to see us, he basically just said he liked Roberto's teeth, that he wouldn't want to go quite as white, but he liked his teeth."

Klopp subsequently denied Hughes' version of events, insisting that he had been having problems with his teeth which required antibioticsand sought to address the issuesby getting a treatment.

"It was not that I saw Bobby Firmino's teeth and went 'I want them!'" the Liverpool boss insisted in an interview with Soccer AM.

He added: "It's a long procedure and I had to go to the toilet. When I went I looked in the mirror and they're really small - I realised, that's the point of never going back, you have to do it now.

"I mean I like them, but obviously it's different. They feel comfortable, it's all good."

Hughes has been working with Liverpool players for a number of years and his first involvement with the club was with Martin Skrtel, who played at Anfield from 2008 to 2016.

"The Liverpool connection started with a friend of mine, who was looking after Martin Skrtel at the time," Hughes explained.

"Martin had an incident on the training pitch and he needed some dental work, so my friend introduced me to Martin, we did some work and he was really happy.

"I think the next player to come was Lucas Leiva, then Lucas introduced me to the Braziliansand it all went from there really."

As noted, the player whose smile makeover is probably most notable is Roberto Firmino and the striker's gleaming gnashers may well have inspired others on the team.

"Roberto just wanted a new smile, as everybody can see. When we design smiles, it's fully customised to the individual," said Hughes.

"When it comes to colour we have a chart from four, three, two, one - one being the whitest. Roberto saw the chart, looked at one, which is the whitest and he asked for 'maximo' - beyond one!"

As well as Klopp and Firmino, Hughes and his dental business have worked with Sadio Mane, Philippe Coutinho and Mario Balotelli among others.

It's not just footballers either and UFC middleweight fighter Darren Till is another one of Robbie's clients, with the pair having crossed paths through mutual friends in Liverpool.

"Obviously, with his job, we asked 'are you sure the time is right now? Obviously you're getting blows to the face and mouth all the time, are you happy with that?'