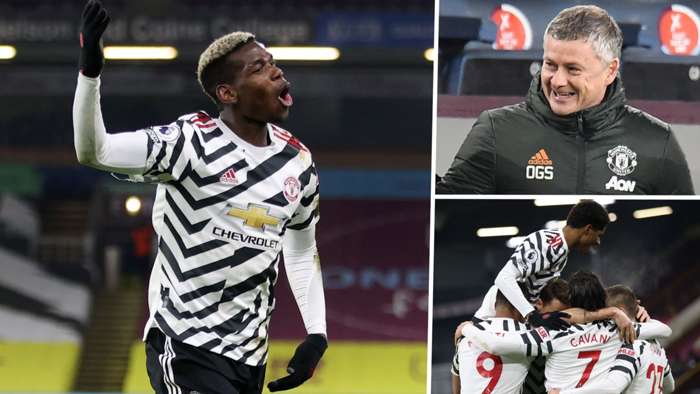 On a freezing cold night and with the odds looked stacked against them, Paul Pogba and Ole Gunnar Solskjaer's Manchester United proved their doubters wrong once again, as they went three points clear at the top of the Premier League with a 1-0 win at Burnley.

Pogba's 71st-minute winner was a case in point. His strike may have taken a decisive deflection off Matthew Lawton but the Frenchman's volley was a demonstration of excellent technique. He deserved his good fortune.

And besides, not much had gone United's way before then, with referee Kevin Friend having incorrectly ruled out a perfectly reasonable headed goal from Harry Maguire shortly before half-time.

The net result, though, is that United will arrive at Anfield on Sunday three points clear of their hosts.

When they last faced Liverpool in the league on Merseyside last January, Jurgen Klopp’s men were 27 points ahead of United. However, Solskjaer's side haven't lost an away game since. Both statistics help illustrate just how much progress this team have made over the past 12 months.

Still, if United are to attain a positive result, the resurgent Pogba will again be key.

Like Solskjaer, he has been constantly question and ridiculed by pundits and fans but the 27-year-old oozes class both on and off the ball, and his performances in recent weeks have shown glimpses of the level of excellence that we all know he is capable of producing.

His movement, range of passing and, perhaps most importantly, vision set him apart from every other player on the pitch at Turf Moor.

He had the most passes, the most touches, won the most fouls and topped the charts for duels. He was immense all over the pitch, in every aspect of his game.

"I’ve always said Paul is a big player for us," Solskjaer remarked at full time. "He is a good character in the dressing room, he is always the one the lads look to and he’s a world champion of course and I think he’s at his best at the moment."

He was even entitled to get frustrated with Marcus Rashfordat one point, with one of United's most dependable performer this season having something of an off-night.

Pogba wasn't the only man left frustrated by United's inability to break the deadlock in the first half.

Solskjaer could be heard swearing from the far up in the stand on the opposite side of the pitch to the press box, after VAR initially reviewed a potential red card for Robbie Brady, who had chopped down Edinson Cavani, before then deciding that Luke Shaw had fouled Johan Gudmundsson in the build-up.

Shaw stayed on, Brady’s yellow card was rescinded and everyone was left scratching their heads.

United never stopped attacking, though. Ask Solskjaer anything about this team and he will talk at length about their mentality. They boast a passion, desire and drive that has arguably been lacking at United since Sir Alex Ferguson retired.

This wasn’t a pretty win at Turf Moor but United displayed impressive composure and resilience in belatedly breaking down a Burnley team who lacked imagination and didn’t manage a shot on target during a controversy-filled 90 minutes.

It's worth noting that United have now scored 16 goals in the final 30 mins of Premier League games this season – only Chelsea have netted more – and it is testament to the spirit that Solskjaer has instilled in this side that they keep fighting right until the final whistle.

"You can see that the game was going both ways, it's very hard to play here. They have a style of play, very strong and we knew it would be difficult. We had to keep our heads calm and just focus on ourselves and hope the goal would come and it did come. It was a great performance from everyone, good focus," Pogba told the BBC at full time, backing up the team's desire and focus.

"Always happy when I win - today we won and I'm happy we play well. Still a long way to go and we have big games to go so we have to focus on that."

As anyone at the club will remind you, there is still a long way to go in terms of the title race but, whether the critics like it or not, United, Solskjaer and their much-maligned midfielder Pogba are now right in the mix.