'Who wouldn't want to have Havertz?' - Bayern step up charm offensive for Germany star 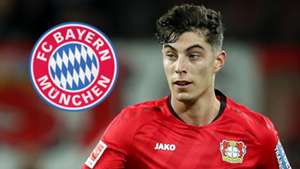 Hansi Flick has dropped a big hint that Bayern Munich are interested in signing Bayer Leverkusen star Kai Havertz as he revealed he is one of the coaches that would like to have the 20-year-old in his team.

The Germany international has emerged as one of Europe's most sought-after young talents with his performances in the 2019-20 season, with Havertz having scored seven goals in his last six appearances.

The likes of Manchester United, Liverpool, Real Madrid and Bayern have been linked with a move for the talented forward, and the Bavarians could well be in the driving seat to sign him, should Havertz want to stay in Germany.

Indeed, Flick, who was named permanent Bayern head coach back in April, is no stranger to the Leverkusen star man's abilities and suggested that the Bundesliga leaders could well be in the market to sign him after confessing he would like him to be part of his team.

The 55-year-old told reporters ahead of Saturday's match against Leverkusen: "I think very few coaches wouldn't want to have Kai Havertz in their team.

"I've known him since the U-17s [Germany national team]. He has developed enormously well at Leverkusen. He moves very well between the lines and has a strong instinct to score goals at a young age."

Former Bayern and Chelsea midfielder Michael Ballack, meanwhile, believes that Havertz needs to be playing in the Champions League - something that neither Chelsea or United can guarantee for the 2020-21 season as things stand.

He said: "This is Timo's decision and you have to respect it. If what's being reported is true, then Chelsea have made a very good signing."