Why are teams protesting Qatar in World Cup 2022 qualifiers? 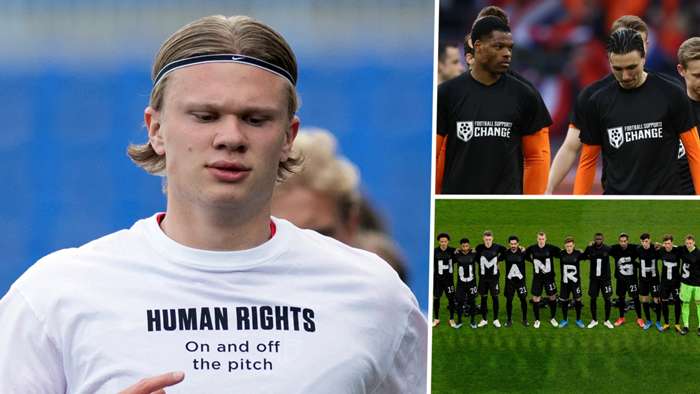 The likes of Norway and Germany were involved in protests directly related to Qatars hosting of the 2022 World Cup during their March 2021 international qualifying matches, taking a stand in support of human rights.

So, why are they protesting Qatar, which other teams were involved and whats the situation been like? Goal takes a look.

Teams are protesting to speak out against alleged human rights violations taking place in the countrydue to host the 2022 World Cup.

There have been multiple reports ofviolations against migrants in the country, with The Guardianrevealing in February that over 6,500 migrant workersfrom India, Pakistan, Nepal, Bangladesh and Sri Lanka have diedsince Qatar won the bid to host the tournament in 2010.

They found that Qatars intense summer heat and the intense working conditions are likely to have played a significant part in the deaths.

Though the report states that death records in a country are not categorised by occupation, Nick McGeehan, a director at FairSquare Projects (anadvocacy group that advocates forlabour rights in the Gulf) stated that there is a very high possibility that the workers who died had been working on building for the 2022 World Cup.

“A very significant proportion of the migrant workers who have died since 2011 were only in the country because Qatar won the right to host the World Cup,” McGeehan said.

Norway, the Netherlands and Germany were involved in protesting Qatars human rights record before their World Cup 2022 qualifiers in March.

Norway started the protest in their match against Gibraltar on March 24, wearing shirts in the warm-up which read:"Human rights on and off the pitch" before they faced Gibraltar and Turkey in World Cup qualifying.

Germany donned t-shirts that spelled out"Human Rights" before they playedIceland.

Norway coachStale Solbakken revealed the reasoning behind his teams protesting, saying that the goal was to "put pressure on FIFA to be even more direct, even firmer with the authorities in Qatar, to impose stricter requirements".

Netherlands boss Frank de Boer said similar sentiments and even addressed the question of whether or not his side would protest the human rights violations even further by simply refusing to participate in the 2022 tournament.

"A lot of attention is now focused on whether we should go there if we qualify," he said after the game.

"It is right to ask that question.Everyone knows that what is happening there is not good.

"Human Rights Watch and Amnesty International have said that if we go there, we can better promote the cause."

A spokesperson for FIFA said in a statement, along with evidence:“With the very stringent health and safety measures on site … the frequency of accidents on FIFAWorld Cup construction sites has been low when compared to other major construction projects around the world."

Qatars Supreme Committee for Delivery and Legacy (SC), who are responsible for delivering the infrastructure forthe 2022 World Cup, have issued the following statement: