Why did Arsenal sell Gnabry if Wenger knew Bayern star would have a 'great career'? 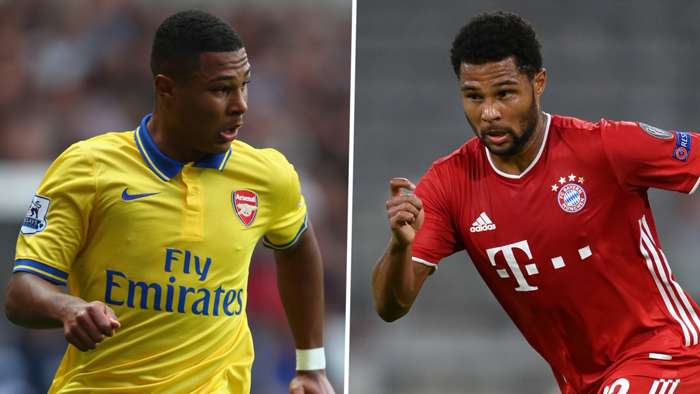 When Arsenal fans see Serge Gnabry dominating in Champions League blockbusters, it must bring a tear to the eye.

But in an incredible story– that takes in a failed loan spell at West Brom and a subsequent move to Werder Bremen –Gnabry now finds going into a Champions League final as the Bavarians' most in-form player.

The commonly held view on Gnabry's departure from Arsenal in 2016 is that the club wanted to sell him because of his chequered injury history and lack of development.

This is not strictly accurate, though. The Gunners never wanted to get rid of the German butthey are culpable for a decisionthat left the player wanting to seek a fresh start.

Gnabry joined Arsenal from Stuttgart as a 16-year-old in 2011 and, just over a year later, he made his debut for the first team in a League Cup match against Coventry.

A Premier League bow followed in October 12 versus Norwich,making him the Gunners' second-youngest player to feature in a league match – at 17 years and 98 days old– behind Jack Wilshere.

Gnabry began to make an impact on the first team in the summer of2013, at just 18 years of age, but a knee injury suffered against Bayern in March 2014halted his progress and put him on the sidelines for the entirety of the following season.

However, as Gnabry returned to fitness for the 2015-16 campaign, Arsenal decided to loan him to West Brom– a move that proved crucial in the player's decision to eventually leave England.

At West Brom, Gnabry made three appearances during a half-season spell that was brought to a premature end by Arsenal during the January transfer window, after Baggies coach Tony Pulis had made it clear that he did not rate the youngster.

"Serge has come here to play games but he just hasn't been at the level required to play the games," Pulis said while Gnabry was still at the club.

"As a manager you pick a team that's going to win a game of football. You pick your best team, you don't leave people out because you don't like them, because of this, that and the other."

The embarrassing nature of that loan spell, coupled with Arsenal's failure to bring him back into the foldafter his injury, saw Gnabry decide to leave north London.

Arsene Wenger has since made it clear that he wanted the winger to sign a new contract with the club, claiming he knew Gnabry would go on to become a star.

"But he wanted to join Werder Bremen and I was very sad," Wenger recently told beIN Sports. "We couldn't get over the line with him but I knew he would have a great career."

Gnabry made an instant impact in his first Bundesliga season with Werder, scoring an impressive 11 goals in 27 league matches, which earned him a to Bayern in 2017.

The Bavarians immediately sent Gnabry out on loan but added him to their senior squad the following summer, after the attacker helped Hoffenheim qualify for the Champions League with a 10-goal haul.

He has since gone from strength to strength at the Allianz Arena, finishing as the club's second-top scorer in his debut campaign, with 13 goals, before establishing himself as one of Bayern's best players this season.

Indeed, the whole world sat up and took notice when he scored four times in the 7-2 demolition of Tottenham in November, while he has now netted five goals in his last four Champions League knockout appearances.

As Gnabry prepares for Sunday's Champions League final against PSG in Lisbon, his name is now mentioned as a potential match-winner alongside the likes of team-mate Robert Lewandowski and PSG superstars Neymar and Kylian Mbappe.

And while the 25-year-old is on the verge of winning his first European Cup, Arsenal are trying to come to terms with the financial impact of a fourth consecutive season without Champions League final.