Why does Bielsa use a translator in Leeds United interviews? 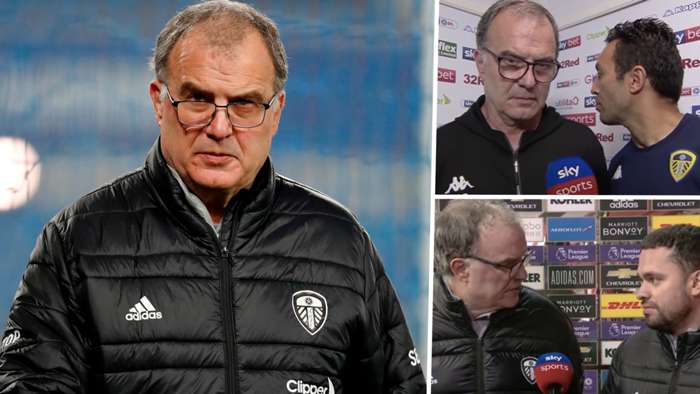 The idiosyncrasies of Leeds United manager Marcelo Bielsa are a relatively new experience for many fans of English football, but people are mostly familiar with him now.

However, the fact that he continues to use a translator for interviews, despite living and working in England since 2018,is something that makes less sense to people the longer he does it.

So why does he use a translator and can he speak any English? Goal brings you all you need to know.

A desire to communicate in a clear and concise manner is the chief reason Bielsa makes use of a translator when he conducts interviews.

The Argentine coach conductsall his press conferences, as well aspre andpost-match interviews, with the help of a translator in order to make himself understood.

A translator is also used when Bielsa wishes to communicate intricate details of his tactical demands to his players on the training pitch.

"If he wants to go into real detail and speak to you properly, then he keeps it in his own language.”

The fact that Bielsa continues to use a translator after a number of years living in England has been a topic of discussion among certain commentators and the coach is aware of the expectations some have.

While he accepts the idea that he should perhapsspeak English in England, he says that he does not have the time to learn properly and stresses thathis focus is primarily on communicating adequately.

"Always, I feel I should talk English," Bielsatold reporters in 2019.“Even if I understood a little English and could transmit ideas, but I can never find the time to learn it a little bit more.

"When you work in one country, which is not your own country, you are obliged to speak the language of the country.

“It is the same if you work in France, Germany or the Czech Republic.

“But if you talk about communication, for me, it’s not a problem. For managers, if they speak less it’s better. If they are brief when they communicate, much better.”

Yes. Bielsa is not a fluent English speaker, but he does have some grasp of the language and uses it in informal settings, such as when he interacts with supporters.

However, Bielsa's vocabulary is clearly much bigger than just 'thank you' and many suspect he understands a lot more than his appearance with a translator may suggest.

According to Leeds striker Patrick Bamford,the Argentine understands plenty and is an adept speaker too, but is conscious of making mistakes.

"I think his English is actually very good in terms of understanding it," Bamford, who is a polyglot himself, said in an interview with Astro Supersport in 2020.

"I think he can speak it a fair bit as well, but because he is so respectful, I don't think he wants to make a mistake in the English language by saying something wrong.

"So I presume that's why he uses the translator all the time."

Indeed, Bielsa's understanding of the language has been illustrated on a number of occasions where he has interrupted his translator in order to correct what he feels is a mistranslation of his words.

On other occasions, he has instructed the translator to speak louder and with greater emphasis in order to relay his meaning.