Why does Marcelo Bielsa sit on a bucket on the sidelines? 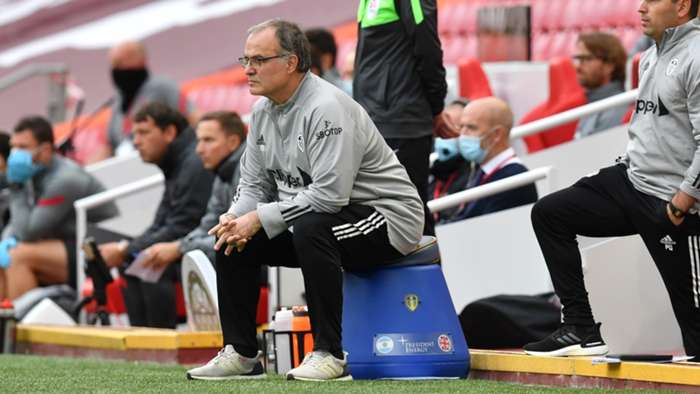 After 16 long years away, Leeds have at long last returned to the Premier League through the guidance of Marcelo Bielsa.

Those watching Leeds games will notice the eclectic coach bizzarely sitting on a bucket on the sidelines, instead of simply just standing up like other coaches - but why does he do so? Goal takes a look.

There are a few possible explanations as to why Bielsa decides to sit on a bucket during Leeds matches.

One of the theories, which is applied to games played at Leeds' home of Elland Road, is that Bielsa sits on a bucket because it allows him a better view of the ground's dugouts - which are deeper than the level of the pitch.

During his time at Marseille, the Argentine sat on an ice cooler boxbefore getting upgraded to a bucket upon his arrival at Leeds.

The Midlands club even gave him a customised placket bucket to sit on, complete with a cushioned seat and the Leeds logo.

When Bielsa was quizzed about his bucket-sitting tendencies early in his Leeds tenure, he told reporters coyly:"You want me to tell you more than what it is? It's just a bucket.

“I have nothing to add. It's a comfortable bucket.”

It's understandable that Bielsa would want to keep his real reasons for the bucket a secret.

Another reason why Bielsa might sit on a bucket is that he has to deal with back pain.

According to Guillem Balague, who spoke in a BBC documentary about Bielsa, the Argentine sits on the bucket for comfort following a gruelling daily walk to work.

“He Bielsa walks the four miles from his home to the training ground," said Balague.

“His intense walking during games and his moments of crouching down on what looks like a plastic bucket is his way of dealing with constant back pain that has not left him since his time as a player.”

Rotherham manager Paul Warne was slightly alarmed himself when he first came face to face with Bielsa and his bucket.

"Sitting down on that thing's a bit weird," Warne had said.

Bielsa's buckethas since become such a phenomenon at Leeds that the official club shop even started selling replica versions.