'Why is VAR only used against Barcelona?' - Koeman furious with technology-assisted Clasico penalty 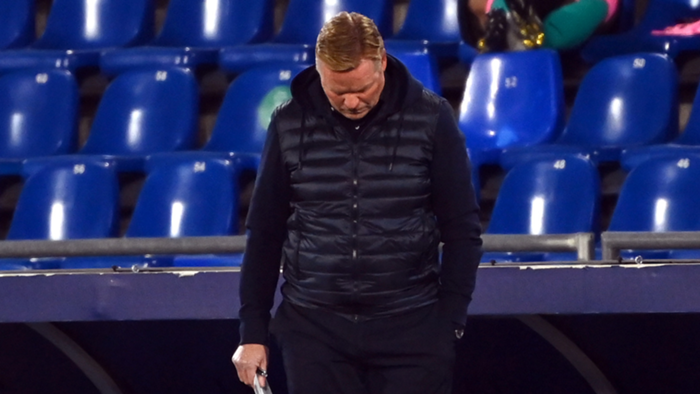 Barcelona coach Ronald Koeman suggested that VAR was unfairly targeting his team after going down 3-1 to Real Madrid in his maiden Clasico on the bench.

But it was Zinedine Zidane's charges who were left celebrating as they prevailed at Camp Nou.

Fede Valverde opened the scoring for the visitors after just five minutes before Ansu Fati responded with an almost immediate equaliser in an entertaining start to proceedings.

Then, with the two giants deadlocked at 1-1, video technology deemed that Clement Lenglet had pulled Sergio Ramos' shirt and awarded a penalty, converted with ease by the Madrid captain.

Luka Modric put the result beyond doubt late on to cap a disappointing afternoon for Barca, but Koeman was left wondering what might have been had the spot-kick not been awarded.

"We do not agree, it was not a penalty for me. I hope one day I can have the VAR issue in Spain explained to me," the Dutchman fired to reporters after the final whistle.

"We are five games in and VAR has only ever been used against Barca.

"Neither Messi's penalty against Sevilla nor the two red card fouls against Getafe. Why is VAR only used against Barca?

"VAR can be great, but for all the teams.

"I haven't spoken to Lenglet but I did see the move. It was a foul by Ramos on Lenglet. Then Lenglet grabbed Ramos, but not to pull him back, in any case he should have fallen forward, not back. Once again, it's not a penalty for me.

"It's normal for the Madrid players to pressure the referee, I have no problem with that. The referee and VAR made that decision in a key moment of the game."

Ramos' strike prompted Koeman to shuffle his team in the search for an equaliser, but the introductions of forwards Trincao, Antoine Griezmann, Ousmane Dembele and Martin Braithwaite from the bench only served to unbalance the Barca XI while adding little in attacking threat.

The former Netherlands boss, though, defended his decision to go for broke, even if it left his side open to concede the third.

"First we let the players already on the pitch try and create scoring chances," he explained.

"Then we chose to add pace on the wings with Trincao and Dembele, and Griezmann's entrance alongside Messi.