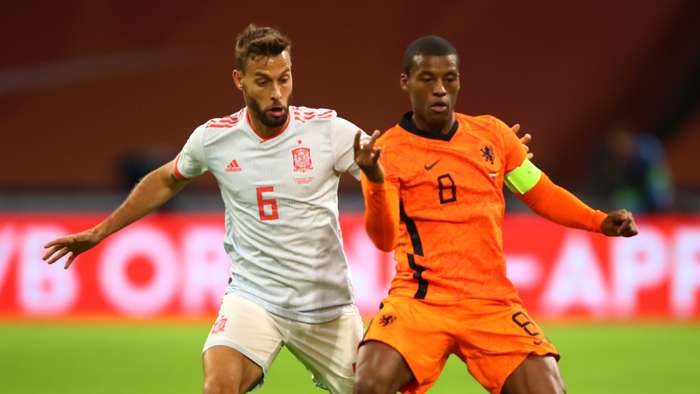 Georginio Wijnaldum is honoured to have captained the Netherlands in their 1-1 draw with Spain but said he has mixed feelings due to the absence of close friend Virgil van Dijk.

Stand-in skipper Wijnaldum played 45 minutes in Amsterdam – the upcoming Nations League fixtures against Poland and Ukraine taking priority, and revealed after the match he had been in close contact with Van Dijk ahead of kick-off.

"Of course it is great to represent your country in this way," Wijnaldum said, who celebrated his 30th birthday on Wednesday. "But I would have preferred for Van Dijk to have been here. Then he would have been the captain instead.

"He makes our team stronger and is still very involved with us. I had him on the phone before the game - we talked about my birthday. But I'll call him again shortly."

Donny van de Beek scored his second international goal in as many games early in the second half to earn the Netherlands a draw against a second-string Spain side.

Sergio Canales had earlier given Spain the lead with his maiden goal for the national side and Netherlands head coach Frank de Boer was unhappy with his team's defending in the first half.

"We forgot to cover properly," he said. "I told them about that at the break and we improved on it. The game turned when De Beek and Luuk de Jong put their opponents under more pressure, more quickly."

De Boer is winless in four matches since replacing Ronald Koeman as coach but is hopeful that run will come to an end in Sunday's home match against Bosnia-Herzegovina.

"Of course I would have liked to have won the game," he said. "Let's go and do that against Bosnia."

Owen Wijndal, 20, was the standout player for the Netherlands on what was just his second senior outing.

The left-back managed more tackles (three) than any home player while nobody turned over possession more times (seven) and intercepted the ball (twice) more often.