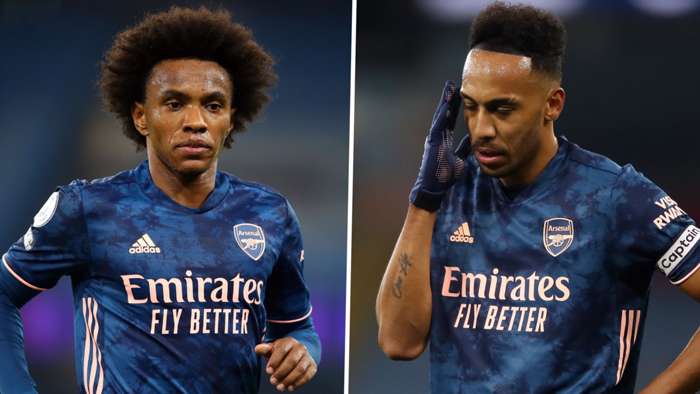 Willian is looking “lost” at Arsenal, says Paul Merson, while the struggles of Pierre-Emerick Aubameyang in the final third are considered to be down to opponents working him out.

Willian made a bright start to life at Emirates Stadium, with there plenty of promise to be found in his partnership with fellow forwards Aubameyang and Alexandre Lacazette.

The South American has, however, gone off the boil of late as Arsenal’s firepower has fizzled out.

Merson admits that a 32-year-old with two Premier League titles to his name looks a shadow of his former self, with consistency proving to be an issue for all concerned in north London.

“Willian was unbelievable at Chelsea last year. For me, he was probably one of the best Chelsea players. He was phenomenal – an outstanding talent.

“He has gone to Arsenal and he looks lost. They have got to get him performing.”

Mikel Arteta also faces a conundrum when it comes to club captain Aubameyang, with the Gabonese finding the target just four times this season – with one of those efforts coming in the Community Shield.

Merson believes a previously prolific presence is being hindered by a role on the left flank, with opponents learning him to cut off his supply line and route to goal.

“When Aubameyang is out on the wing, he can go 15 minutes without touching the ball,” Merson added.

“You can’t have your star player going that long without touching the ball. How many goals would Jamie Vardy get for Leicester if you played him out on the left wing? Not as many as he gets now, that’s for sure.

“They are stopping the cut inside and shot into the far corner. Something has got to change. At the moment, he’s not seeing enough of the ball where it matters.”