Woeful Willian, goal-shy Aubameyang and the issues Arteta must resolve at Arsenal 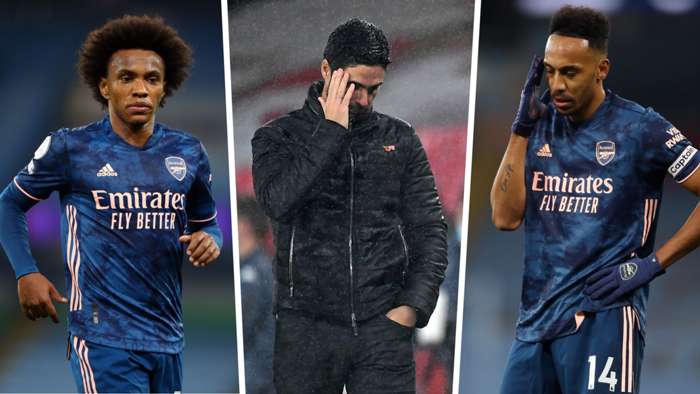 It may sound like a classic football cliche, but this latest international break has certainly come at a good time for Mikel Arteta.

Arteta’s side scored just once during that run of matches, and that came from the penalty spot when Pierre-Emerick Aubameyang netted against Manchester United to earn a 1-0 win at Old Trafford earlier this month.

You have to go back to the 2-1 victory against Sheffield United at the end of September to find the last time Arsenal scored from open play in the league.

It has been six hours and 26 minutes since Nicolas Pepe’s fine individual effort added to Bukayo Saka’s earlier header against the Blades. Defeats against Manchester City, Leicesterand Aston Villa have followed, with the victory over United representing Arsenal’s solitary success.

What had been a fairly encouraging start to the new league campaign has now flipped into one that is being viewed as cause for concern, and not just because of the losses, but because of the style of football and the struggle for goals.

Arsenal have scored just nine times in their opening eight matches of the Premier League season;that is their lowest goalscoring tally since the start of the 1998-99 season.

Aubameyang has scored just twice; his only strike from open play came at Fulham on the opening weekend of the season. Arsenal’s most prolific striker has mustered just 10 shots on goal since the start of the league campaign, while Alexandre Lacazette has had just nine.

When you consider that Harry Kane tops the shots-on-goal table so far this season with 38, it isclear that something is drastically wrong.

And that is justone of a number ofproblems that Arteta must spend the next fortnight trying to solve.

“What is certain is that with these numbers and scoring this amount of goals, it is impossible to fight with the top teams,” Arteta admitted in the aftermath of the Leicester defeat. “We have to improve our numbers attacking-wise if we want to be challenging and want to be consistent in winning football matches.”

Arteta has several issues to ponder over the international break. What does he do with the horribly out-of-form Lacazette and Willian? How does he give Aubameyang more opportunities to do what he does best? Is now the right time to move away from the system that played a major role in Arsenal’s FA Cup success just a few months ago?

All are questions he must find an answer to if Arsenal are to ensure they do not find themselves facing another season floating around mid-table, or even looking nervously over their shoulders towards the bottom half of the Premier League.

The form of the front three is the major issue. Arteta has shown a lot of faith in Lacazette and Willian so far this season, and that faith has yet to be repaid.

Lacazette did start the campaign with three goals in his first three games, but he has now gone fourgames without a goal and produced the type of display against Aston Villa which must surely convince Arteta that it is time to shake things up.

The France striker had just 15 touches during the 65 minutes he was on the pitch, making just nine passes - only two of which were in the opposition half. He also missed a golden chance to make it 1-1 when he headed Kieran Tierney’s cross over the bar from six yards.

It was a similar story against Leicester in the previous home game when Lacazette somehow failed to get his head on another Tierney cross, this time when the game was still locked at 0-0.

The former Lyon man is missing big chances and, in a team who struggle to create clear opportunitiessuch as Arsenal are right now, that is something that will cause major problems.

“When you get chances and you don't even hit the target, it is a really complicated way to win football matches,” Arteta said after Sunday’s defeat, in what could be a hint that changes are afoot.

Playing Aubameyang - one of Europe’s most prolific strikers - on the left of the front three has always been a source of debate at Arsenal, but when he still managedto score at the rate he was last season, it wasone that was easier to ignore.

With the Gabon international now having scored just twice in the league in eight matches, however, it isa debate that is raging once again.

“Of course we can talk about is this the right or wrong place for him, but when things were working and he was scoring that debate wasn't there,” said Arteta.

The fact is, however, Aubameyang is not scoring right now, and nor are Arsenal. And when chances are arriving, they are falling to the wrong person because Aubameyang is stuck out on the wing.

It isbecoming increasingly difficult to justify playing the 31-year-old on the left to accommodate Lacazette as the central striker when the latter is so horribly off his game.

And it isa similar situation on the right side of the front three, where summer addition Willian has been woefulin recent weeks.

The Brazilian iswithout a goal or assist since the opening day of the season but continues to keep out Pepe, despite the Ivory Coast international having already found the net three times in 12 games.

Pepe may not give Arteta the work rate and tactical knowhow that Willian provides, but he is a genuine goal threat and chips in with valuable assist.Since his debut in August 2019, only Aubameyang (33) has made more direct goal contributions for Arsenal than the 23 that the club-record signing has provided.

This next fortnight will be key for Arteta in terms of how he plans to move things forward at Arsenal. He has been in the job for a nearly a year now and the progress has been undeniable.

He picked up the pieces following the disastrous end to the short-lived Unai Emery era and somehow led what had been a shambolic Arsenal side to a 14th FA Cup success.

But now he has to take the next step. How he does that only time will tell but it feels like the right time to move away from the 3-4-3 system that has been at place at Arsenal for some time now.

The arrival of Thomas Partey has given Arteta the opportunity to move once again to a flat back four. So far he has resisted the urge to do so, but that could be about to change.

“Yes, for sure,” said the Arsenal boss, when asked whether he would spend the international break pondering a change of system. "We do that every week. You know, look at how we can get into better positions in the final third, with certain numbers in the positions that have to be occupied all the time.

“We will look at that again and try to modify certain things to try and get better like we always do.”

The obvious switch for Arsenal is a move to a 4-3-3, with Aubameyang moved inside to occupy the central striker role in attack with Bukayo Saka and Pepe on either side.

Arsenal need to create more chances, and since the start of last season Saka tops the assists chart for the Gunners with 14 and Pepe is just behind in second, with 12 to his name.

Partey could then partner one of Mohamed Elneny, Granit Xhaka or Dani Ceballos, with either Willian or the underused Joe Willock in the more advance role at the tip of the midfield three.

There is also the opportunity to switch to a 4-2-3-1. It was notable that when Arteta changed to that formation during the second half against Sheffield United in September - with Willian playing in the No.10 role behind Saka, Aubameyang and Pepe - Arsenal served up arguably their best 30 minutes of the season, scoring twice.

The manner of the defeat againstVillafelt like something that cannot be ignored. It was the type of performance that has to lead to some sort of change - whether that be tactical or in terms of personnel.