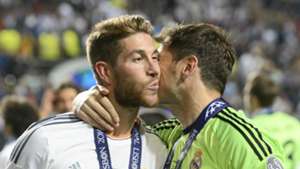 Iker Casillas has fondly remembered helping Real Madrid to their 10th European Cup success and has lifted the lid on what he told team-mate Sergio Ramos after the encounter.

Los Blancos had to wait 12 years to lift 'La Decima', becoming the first club in the history of the game to do so, with a 4-1 victory over city rivals Atletico Madrid in Lisbon's Estadio da Luz on May 24, 2014 making the event a particularly special one.

Real, however, had flirted with defeat. They trailed to a Diego Godin goal after 36 minutes and did not force extra-time until Ramos' 93rd-minute intervention.

After a scoreless first additional period, Carlo Anceotti's side ran riot in the second, with goals from Gareth Bale and Marcelo putting the game beyond Atleti's reach before Cristiano Ronaldo added a late fourth from the penalty spot.

Answering questions on his Twitter feed, Casillas revealed that he reserved special praise for Ramos after the game.

"I told him: 'You're the f*cking boss and will always be the player who delivered LA DECIMA!' Then I gave him a kiss," he revealed.

"For me, finally winning it was a relief. I felt very happy for the fans. I suppose suffering for so long to win it gave it a special flavour. We'd gone through a few tough years in Europe and at last we were able to achieve such an important success."

Casillas won three Champions League titles with Real, with the 2014 success being the last of these. However, it was not his fondest memory of a European Cup final.

"The 2000 final, of course. It was my first Champions League triumph," he said.

During that encounter, Madrid eased their way past another Primera Division rival as they thumped Valencia 3-0 in Paris' Stade de France. Goals from Fernando Morientes, Steve McManaman and Raul gave them victory on that occasion.

Casillas, who completed his career at Porto, played 725 times for Madrid, including more than 150 encounters in the Champions League.

Since picking up their 10th European Cup, Madrid have won it on a further three occasions, with Zinedine Zidane's side becoming the first to win the Champions League on back-to-back occasions, picking up a trio of titles between 2016 and 2018.