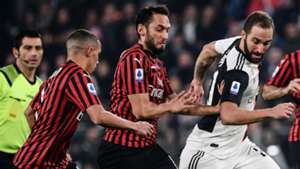 Juventus will be confident of taking the upper hand when they travel to the San Siro to take on Milan in Thursday's Coppa Italia semi-final first leg.

Maurizio Sarri's men boast a dominant recent record over this opposition, coming out on top in each of the last nine encounters.

Indeed, they are even money (2.00) favourites with bet365 to put one foot in the final with an away win here.

The Rossoneri are unbeaten in seven matches in front of their own fans, but are 13/5 (3.60) outsiders to emerge victorious against this opposition for the first time since 2016.

Five of the hosts' last seven matches on home turf have resulted in draws, and you can get odds of 5/2 (3.50) on this one also finishing up all square.

Rade Krunic and Leo Duarte are both ruled out due to injury, while Andrea Conte is suspended.

Douglas Costa is unavailable after being forced off in Saturday's defeat to Verona, joining Merih Demiral, Danilo and Federico Bernardeschi, Giorgio Chiellini, and Sami Khedira on the sidelines.

Such is the Bianconeri's superiority over their rivals that they have conceded just one goal in the five most recent encounters, although that seems unlikely to continue on Thursday.

With only two clean sheets to their name in 13 fixtures on the road, they cannot be expected to keep at bay an opposition forward line that looks reinvigorated since the return of Zlatan Ibrahimovic.

Stefano Pioli's team has scored 15 goals in the last seven matches, although they have also conceded nine in the most recent five.

All odds correct at time of publish. Please gamble responsibly.