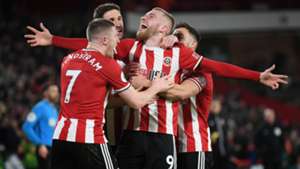 Certainly the surprise package in the Premier League this season, Sheffield United are just two points away from a Champions League place with 12 games to go.

The Blades have the second-best defence, with their 24 goals conceded bettered only by runaway leaders Liverpool, and are 14/1 (15.0) with bet365 to finish in the top four.

It was a fairly innocuous start to the season by Chris Wilder's men as they picked up eight points from their first seven games and were almost certainly targeting Premier League safety at that stage of the campaign.

However, after a 1-0 loss to Liverpool at Bramall Lane in September, the South Yorkshire side lost just two more league games in the calendar year on their way to picking up 21 points during that 13-game stretch.

That sequence of results firmly established the Blades as one of the most robust sides in the division and they are now just 1/7 (1.14) to finish in the top half, given their eight-point cushion above 11th-placed Burnley.

The most points ever picked up by a newly-promoted team in a 38-game season is 66, achieved by Ipswich Town back in 2001, and eclipsing that would certainly give the Blades an excellent chance of playing some kind of European football next season.

bet365 also go 6/1 (7.0) that Wilder guides his side to sixth place, which would be their best return since 1975, and that could lead to a Europa League spot should any of the five teams above them win the Carabao Cup or the FA Cup.

Given how tightly-packed the majority of the top half is, with ninth-placed Wolves just six points behind Chelsea in fourth, a seventh-place finish is certainly a possibility and is available at 7/2 (4.50).

Similarly, United occupying either eighth, ninth or 10th at the end of the season is available at 6/4 (2.50) - a finish which would surely shatter their initial pre-season expectations.