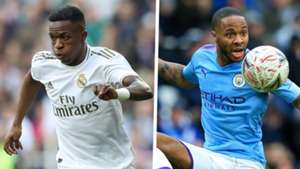 Real Madrid youngster Vinicius Junior has drawn inspiration from Raheem Sterling amid criticism of the Brazilian's displays in front of goal this season.

The teenager arrived from Flamengo for EUR46 million (?39.5m/$51m) in the summer of 2017, making him the most expensive player under the age of 19 at the time, and the second-most expensive Brazilian behind Neymar.

After spending his opening few months in Spain with Madrid's Castilla outfit under Santiago Solari, the forward's performances developed rapidly and he was subsequently promoted to the senior side, where he kept fellow forward Gareth Bale out of the starting lineup.

But after an ankle injury sustained last March ruled him out for two months, the Brazilian has failed to hit the heights reached at the beginning of his Madrid career.

Vinicius has just three goals in 23 appearances in all competitions this season, but is aiming to emulate Manchester City's Sterling in terms of his attacking advances.

"When I played in the youth categories, I was used to scoring a lot of goals, but in professional football I'm playing further from the goal and it's harder to score," Vinicius told Esporte Interativo.

"Karim [Benzema] and all the players who are always scoring try to help. When I start to score, I'll score a lot of goals, just like every winger here.

"Sterling for me is an example. At my age, he played just like me and didn't score too many goals, and this season he has already scored a lot. Last season, he scored even more.

"I'm improving a little bit. I'd never played on the right side, but here I had to. And it gets hard for me because all my moves on the left side are natural, I know everything that I should do.

"But on the right, I have to think more. On the left side, I do everything without thinking."

The Brazilian could come up against his fellow attacker later this month, when City and Madrid come together for their Champions League round of 16 encounter, a game which Vinicius is looking forward to.

"It will be a great game," added the 19-year-old. "We're always ready, no matter the opponent."

"Madrid is always a contender in the Champions League. This year we really want to win it.

"It will be tough, because City are a team that play football really well, they know the game. Pep Guardiola knows the game. We have to pay attention to what can happen on the pitch."