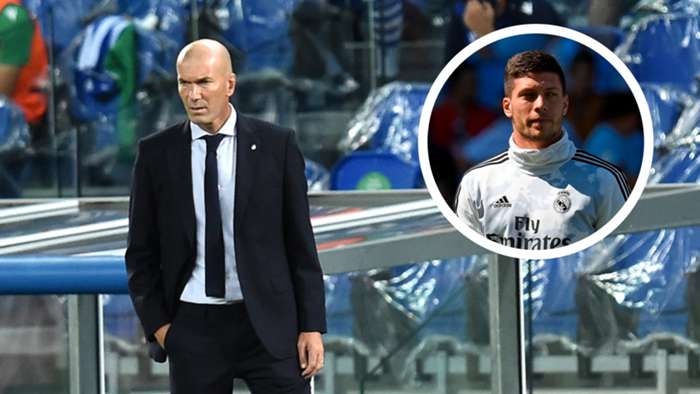 Zinedine Zidane has defendedhis decision to keep Luka Jovic on the bench as Real Madrid were held to a 0-0 draw byReal Sociedad on Sunday.

Despite his side needing a goal, Zidane opted to keep Jovic on the bench and instead brought on young attackers Marvin Park and Sergio Arribas late in the match.

Jovic has struggled to impress at the Santiago Bernabeu but Madrid's manager was quick to dismiss suggestions he had a problem with Jovic or any other player that didn't get minutes against Sociedad.

"I’d have had to take Karim Benzema off, but he was playing well. By playing two centre-forwards, I would have needed to change the formation yet I wanted to keep two wingers on the wings."

"We have a squad and many players and I have to choose. Today, this is how I picked things. But, I don’t have anything against any player. Like I said before, I didn’t want to change the formation.

"We always want to win, so it’s a little bit liketwo points dropped. We had a few chances in the first half. I think we had a good game in defence, but we lacked something in attack. Physically we dropped off, but I think that’s normal. We only had three weeks of pre-season and we only had one friendly match."

After spending last season on loan at Sociedad, Martin Odegaard started the game for Zidane's side before being withdrawn in the 69th minute.

Having impressed with Sociedad last season, Zidane backed the Norwegian star to slowly but surely show his full quality for Madrid.

“I am happy with his match. I think he’ll get it little by little. But we have to be patient with him and with everyone," Zidane said.

The French manager was also quick to dismiss the fact Casemiro didn't start the match, stressing it was a "one-off thing".