'A field goal is worth three points!' - Gundogan mocks his penalty misfire against Liverpool 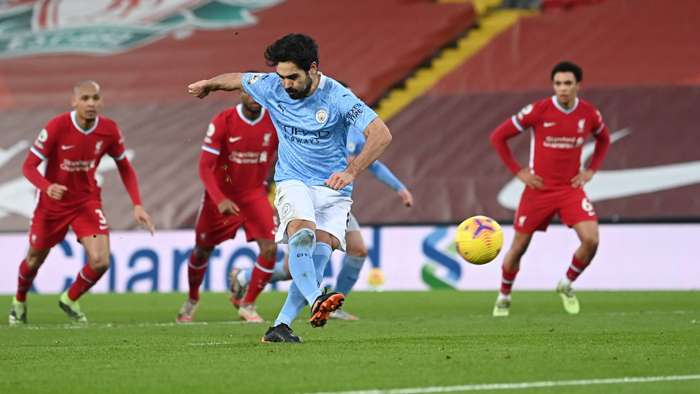 Ilkay Gundogan was quick to make fun of his own penalty miss on Sunday as he says he was inspired by the upcoming Super Bowl when he skied his shot up and over the crossbar.

Gundogan scored two goals from open play following the mistake, also helping to alleviate criticism lodged against him. He still might lose his spot kick duties to goalkeeper Ederson, however.

After the match, Gundogan mockingly compared himself to an American football kicker.

It's the Super Bowl in the U.S. on Sunday, providing Gundogan the perfect angle to make fun of his penalty kick into the Kop during Manchester City's 4-1 win.

"When they tell you it's #SuperBowl and a Field Goal is worth 3 points..." he wrote on Twitter with a photo of the incident attached.

During his post-match interview with BBC Radio 5, Gundogan took a more serious approach to his penalty miss. In a match with such high stakes, the overpowered shot could have been a season-changing event.

"I need to admit that missing a penalty is always a bad thing, especially early in the game," Gundugon said. "There's always a danger of dropping confidence, but after I missed I just tried to do the simple things as well as possible.

"Don't get distracted by the penalty and try to keep going and help my team to win. It worked out well.