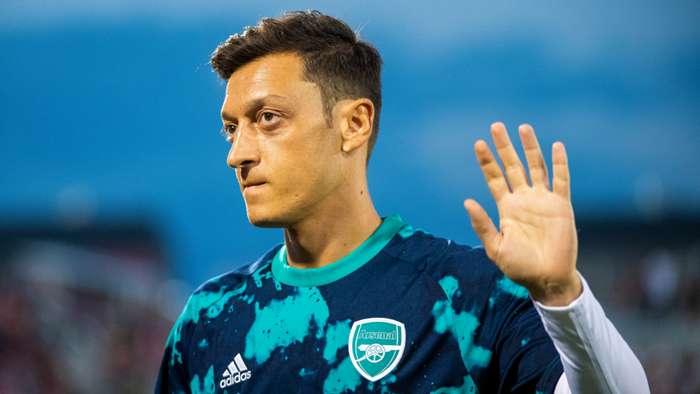 Arsenal chief executive Vinai Venkatesham has defended the club's response to Mesut Ozil's condemnation of the treatment of Uighur Muslims in China.

The north London club have several business ties in China and were accused of prioritising commercial interests in their response.

"I don't think it's fair to say we took a commercial view," Venkatesham said at theFT Business of Football.

"I know it is how it has been reported but I don't think it is fair to say it."

"Our position was it was a statement the player made in an individual capacity.

"There wasn't a commercial driver behind that, it was simply being clear it wasn't Mesut making a club statement, it was him making one in an individual capacity, as is his right."

Ozil spoke out against reports that Uighur Muslims are being held in concentration camps, which China claims are "re-education" camps used tointegrate the minority group to society and reduce the chances of separatist violence.

Ozil posted on social media: “They burn their Qurans. They shut down their mosques. They ban their schools. They kill their holy men.

“But Muslims are silent. They won’t make a noise. They have abandoned them. Don’t they know that giving consent for persecution is persecution itself?”

The Germany international followed up with an interview in The Athletic, admitting he was disappointed by Arsenal's response.

“It doesn’t matter what religion or colour you are - Muslim, Christian, Jew, black, white or anything else. We are all the same," he said.

“What I said was not against Chinese people, it was against whoever is doing this to the Uighur Muslims and other people who are not helping them, such as other Muslim countries.

“I have given a lot to Arsenal, on and off the pitch, so the reaction was disappointing. They said they don’t get involved in politics but this isn’t politics and they have got involved in other issues."

Ozil's last appearance for the Gunners was a Premier League clash against West Ham in March 2020. He was soon dropped from the team and left out of the squad completely by Mikel Arteta for the 2020-21 campaign.

The 32-year-old finally left the club in the January transfer window, making a free transfer to Fenerbahce.

He signed a three-and-a-half-year contract with the Turkish giants and has made four appearances so far.