'Bukayo and Emile are special but Mesut's the best I've seen' - Arsenal youngster on Saka, Smith Rowe and Ozil 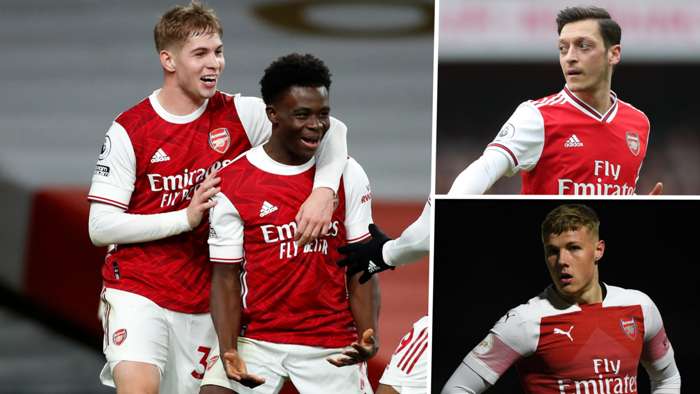 Bukayo Saka has been turning heads at Arsenal for years.

From coaches to team-mates, everyone could see how special Saka was from an early age so his rapid rise to prominence since being handed his senior debut in 2018 has come as no surprise.

And for some – including young Arsenal centre-back Daniel Ballard– it has also come as a relief.

“If Bukayo didn’t go right the way to the top, then there was no hope for any of us,” the 21-year-old told Goal.

“He was an U16 playing in our U18s and he was consistently the best player. If there was one person who you knew would go and score you a goal or produce a bit of magic, it would be him.

“Even in the U23s, I remember that a lot of our hopes we’re almost put on him, or mine we’re anyway. He was the one person who I knew would score or win us the game.

“Everyone who knows him is extremely pleased for him.”

In what has been a difficult few years for Arsenal, some of the younger players who have progressed through to the first team from the academy have helped lift the gloom.

Saka has undoubtedly been the shining light, but Reiss Nelson, Joe Willock, Eddie Nketiah and Ainsley Maitland-Niles have all made an impact on the senior side, as has Emile Smith Rowe.

The Croydon-born playmaker has seized his opportunity in the first team in recent weeks, so much so that he might find himself rested on Saturday when Arsenal kick off their FA Cup campaign with a home tie against Newcastle in the third round.

Smith Rowe is another player Ballard knows well, with the pair having progressed through the youth ranks together.

And the defender – who is currently spending the season on loan with Blackpool – believes the attacking midfielder has what it takes to go on to achieve great things in the professional game.

“Having played with them, you can see the qualities they all have,” said Ballard. “Not just Emile and Bukayo, but Eddie, Reiss and Joe.

“But Emile is a special player. He’s a player I think that every manager would want in their team.

“He’s a real team player and I think he really suits Arsenal. He gets the ball and moves it, he runs at the defenders. He just suits the way Arsenal play and he’s someone who will definitely go to the very top.”

Ballard has been with Arsenal since he was seven and after some difficult times during his teens – when he was twice told he was being released– his focus is now on forcing his way into Mikel Arteta’s plans once his spell at Blackpool comes to an end.

Prior to his loan move to Bloomfield Road, the Northern Ireland international spent a lot of time training with the senior squad at London Colney and he wants more of the same when he returns.

One player who he won’t be coming up against, however, is Mesut Ozil, who is out of contract in the summer and could even leave the club this month, should an agreement be found in the coming days.

The German has won the FA Cup four times since his move to north London from Real Madrid in 2013 and Ballard knows his talent only too well.

“I always say Ozil is the best I’ve ever seen live or trained with,” said the young defender. “It’s like he sees everything in slow motion. The way he moves and flows with the ball is so natural.

“You can’t predict what he is going to do and you can’t switch off for one second or leave half a metre gap by being a bit lazy because he will pass the ball straight through it.