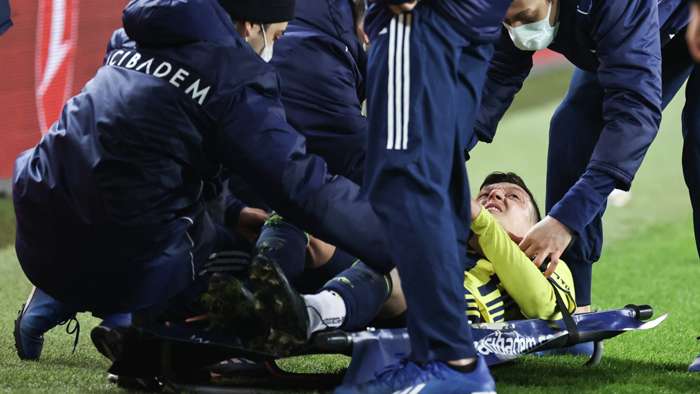 Ex-Arsenal star Mesut Ozil was stretchered off injured during his latest outing for Fenerbahce on Thursday.

The 32-year-old went down awkwardly on his ankle following a challenge from opposition forward Fredy and was unable to continue thereafter, compounding what has so far been a frustrating start to his Fenerbahce career.

Ozil will have to be evaluated by the club's medical staff before a firm timeframe can be given on his recovery, but he could now be a doubt for a Super Lig meeting with Konyaspor on Monday.

Fenerbahce are also due to playGenclerbirligi and arch-rivals Besiktas before the end of the month as they continue to chase down their first domestic crown since 2013-14.

Supporters will hope that Ozil can get back on the pitch in time for both fixtures, with it possible he could only be out for a few days if turns out he has only suffered a light ankle sprain.

Arsenal agreed to terminate Ozil's contract at Emirates Stadium in January after he was deemed surplus to requirements by head coach Mikel Arteta.

The former Germany international subsequently signed athree-and-a-half-year contract with Fenerbahce, which was initially seen as a major coup for the Turkish club, but he has been unable to hit the ground running at SukruSaracoglu Stadium.

Ozil has already appeared in seven games across all competitions forErol Bulut's side, but has yet to record a single goal or assist, and he blew a great chance to open his account againstAntalyaspor.

The playmaker looked certain to score after receiving a pass in acres of space in the penalty area just before the interval, but rushed his shot and dragged the ball wide of the near post, much to the dismay of the Fenerbahce coaching staff watching on fromthe dugout.

Ozil had gone over nine months without playing a competitive game before his arrival at Fenerbahce, meaning it was always likely to take time for him to rediscover his best form.

However, the one-time Arsenal talisman has endured his fair share of struggles with injury in the past, and the Turkish club will have to manage his latest issue carefully in order to avoid losing him for a significant period of time.

Why is Ozil wearing No. 67 at Fenerbahce?

With Ozil out, summer window key for Arteta – Campbell