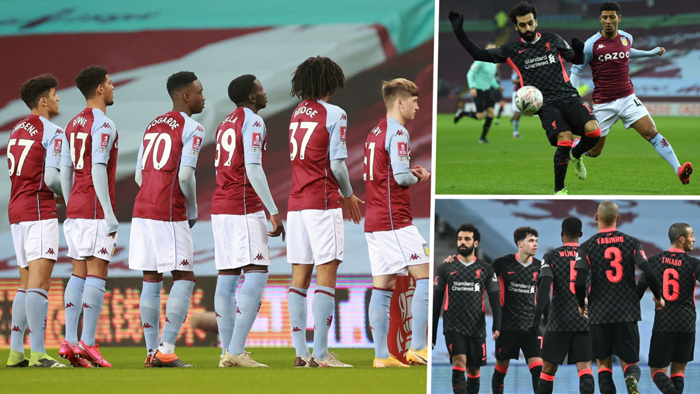 This, quite frankly, was a game that should never have been played. A game between the Premier League leaders, the reigning champions, and a group of teenagers, pressed into action on primetime TV just so, despite everything, the show could somehow go on.

When all was said and done here, Liverpool were into the FA Cup fourth round. Safely through, despite a minor scare, after beating an Aston Villa side made up entirely of academy players, and managed by their U23s coach.

The Reds’ 4-1victory may have ended a three-match winless run, but if this is ‘elite’ football in 2021, then questions must be asked.

Nobody was celebrating at the final whistle, and you could understand why. So much for the magic of the cup.

“I am not going to pretend that this is a good news event,” said Christian Purslow, Villa’s chief executive - and that was before kick-off.

An outbreak of coronavirus meant Villa attacked the so-called ‘greatest cup competition in the world’ without any of their senior squad, manager Dean Smith or his first-team coaching staff.

In their place were a mix of U23 and U18 players, none of whom had previously featured in a senior squad. Most of them had, according to Purslow, “been dropped off by their parents” for the game. One, defender Jake Walker, had been recalled from a loan spell with Alvechurch, of the Southern League Premier Central, on Friday morning.

Fantastic for those kids, of course. And what an account they gave of themselves, against some of the world’s best players. Mark Delaney’s side were level just before half-time, picking themselves up after conceding inside the first four minutes. They were overwhelmed after that, but they can be proud of their efforts. They were brilliant.

Jurgen Klopp had made few concessions despite the callow nature of his opponents. Liverpool fielded the likes of Mohamed Salah, Sadio Mane, Jordan Henderson and Fabinho in their starting XI and brought Thiago Alcantara and Roberto Firmino, among others, off a star-studded bench.

The result, of course, was never in doubt, even after Louie Barry had levelled for the home side before half-time. Liverpool had checked on the 17-year-old, who came through West Brom’s academy, a year ago when he was leaving Barcelona, and they will certainly have been impressed at how calmly he converted his first chance of the evening, having run behind Rhys Williams to reach Callum Rowe’s through-ball.

At that point there was the prospect, albeit faint, of one of the great all-time cup shocks, but Liverpool were always going to overwhelm their hosts after the interval, and three goals in five second-half minutes did the trick.

On they go, then, but what damage is being done to the sport itself right now, as it ploughs on – or attempts to –despite everything?

Villa’s next league game, against Tottenham on Wednesday, looks certain to be postponed. More will follow, surely, as Covid cases continue to rise across the Premier League. They announced 40 positive tests this week, and there will be more for sure.

Even the managers are starting to understand we might be reaching a breaking point.

“Financially it's right to play on,” said Newcastle boss Steve Bruce this week. “But for me, morally, it's probably wrong.” West Brom’s Sam Allardyce has called for a 'circuit-breaker'for the league, while Tottenham’s Jose Mourinho believes further postponements willmake it “impossible” for his side to complete their already-crowded fixture schedule.

Many players, meanwhile, believe they are being treated as guinea pigs, forced to play and to risk their own health as well as that of their families.

Clubs are losing money by having to play games, while the integrity of each competition is being compromised on an almost daily basis. It certainly was here, and it will be again on Saturday, when Derby County will play Chorley with a team of academy players.

Southampton’s tie against Shrewsbury has already been called off, while the Women’s Super League schedule has been decimated.

In the EFL, 112 positive Covid-19 tests were recorded across 66 clubs, meaning postponements are inevitable. Some clubs are already well behind in terms of games played.Further down the ladder, proposals have been made to scrap the season entirely.

Nobody is suggesting the same should happen at the highest level, of course, but it is clear that something will have to give in the coming weeks. English football’s determination to crack on as if everything is fine, playing both domestic cup competitions, cramming in league fixtures and asking clubs and players to deal with the fallout, simply cannot go on.

It’s a romantic’s competition, the FA Cup, but there was nothing romantic about this. It wasmen against boys, and guess what? The men won.