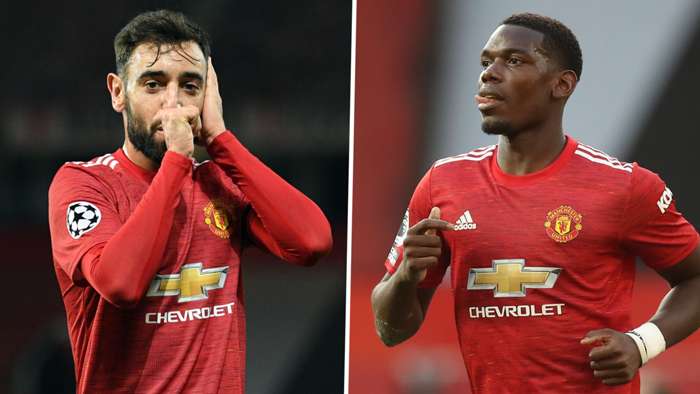 Bruno Fernandes says his working relationship with Paul Pogba at Manchester United “is good”, with the Portuguese playmaker of the opinion that a French colleague can be unfairly criticised at times.

Fernandes was expected to complement Pogba, allowing a World Cup winner to rediscover his best form.

It has, however, been the Portugal international that has become a talismanic presence for United, with his value to the cause allowing a sleeping giant to awaken from its slumber.

Pogba has been shunted out of a No.10 role as a result, with Fernandes now the key component in Solskjaer’s side, but progress is being made as a collective by Premier League title hopefuls.

Fernandes expects Pogba to be as important to trophy quests as any other player, with the 26-year-old telling NBC Sport of a team-mate that he was excited to link up with in Manchester: “The relationship I have with Paul is good.

“He speaks Italian and I speak Italian, from the beginning I knew him from Italy and he knows me. It was easy to work with him.

“Straight away when I arrived, he was injured. I saw him recovering and training on the pitch away from us.

“It shows you the confidence he gives to you, like when he comes back, he's trying to help you become better and you help him to become better.”

Pogba has continued to face his critics this season, amid renewed exit talk at Old Trafford, but Fernandes feels the 27-year-old should be cut some slack as he has been doing his best in difficult circumstances.

He added: “We ended the 2019-20 season really well playing together. But of course the beginning of the season was hard for Paul because he had Covid.

“We know it's not a joke, it's hard to come back after 15 days isolated doing nothing.

“It was really difficult for Paul to find his form but I think he's much better and feeling much more confident.