From Beckham to Ronaldo: Why are footballers at the apex of male beauty? 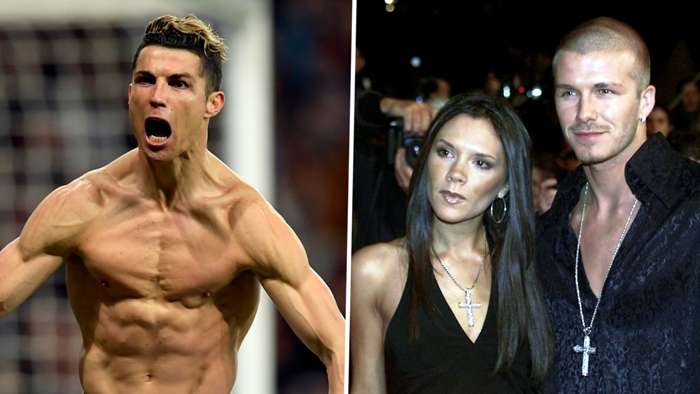 As Jane Austen once wrote in Pride and Prejudice, “It is a truth universally acknowledged that footballers are very handsome.”

You’ve got the DNA for what some might consider the 'ideal'male creature.

From your David Beckhams to your Cristiano Ronaldos, to your Kakas to your Olivier Girouds, to your Xabi Alonsos to your Claudio Marchisios, footballers have been the apex of male beauty for decades.

Unlike NFL players, most footballers are muscular but not overtly bulky; they need great endurance to cover the cross country-like distances of a football game, and their slender but muscular bodies are the perfect build for this.

At the same time, they aren’t as slight as baseball players, but not too tall like some basketball players, and even compared to cyclists, who they share similar body builds with due to their levels of high endurance, footballers are unmasked. Their facial features are exposed freely to the air and also the world, no helmet to obscure their oft-stunning physical beauty.

When you and your mates debate about which sportsperson is the most attractive (admit it - you’ve done this), it’s almost certain a footballer’s name will rattle off your tongue.

Not a pro-wrestler, or a hockey player, or - God forbid - a golfer. The likes of the Beckhams and Kakas are deemed the idea of universal perfection, possessing the kind of physical qualities that a majority of men and women will find appealing -not too much of anything but not too little of it either, with attributes most men will want to emulate for themselves.

No sports competition has as much extensive appeal as the World Cup. It being a truly diverse and international tournament has cemented its ubiquitous status. There will be more casual watchers of the World Cup than the showpiece NBA play-offs or even the NFL Super Bowl, which are considered strictly all-American.

Science and evolutionary biology - as well as survival - play a crucial part.

“It goes back to the theory of sexual selection, which posits that our sexual preferences have evolved to maximise our reproductive success,” Erik Postma, an evolutionary biologist at the Centre for Ecology and Conservation at University of Exeter, tells Goal.

“You maximise reproductive success by choosing the right partner. You choose because they are going to be able to provide you and your offspring with not just food, but with protection. The fathers provide DNA and then, and with the passing of their DNA, give you offspring of high quality.”

The fact that footballers possess the qualities that would, from a biological perspective, secure reproductive success, remains relevant today.

Footballers being of a muscly build suggest that they would be optimised to protect, while their high endurance levels and lanky, slim bodies allow for superior hunting skills - running after animals foraging for food.

“These qualities increase your chances of surviving and providing for more offspring,” Postma continues. “It’s about how important your physical fitness is to your surroundings.

"There is a close link between the two - high endurance allows you to better protect your partner, and the more that evolutionary fitness is increased, the higher chances there are of surviving.”

This balance is considered ideal for evolutionary survival - and footballers are the perfect harmony of what is considered the ideal male body for many.

“You would expect a lot of these things to a certain optimum-so it's not too much, but not too little,” adds Postma.

“You get what'd be called trade-offs, so you can be super muscular, but it means that you can’t run for more than a hundred meters. In general, we look for a perfect package of those different aspects.”

And in terms of what we considered aesthetically pleasing, facial symmetry plays a huge part.

“There is some idea that it's the symmetry that makes a face more attractive – or a certain ratio,” says Postma.

While it’s been identified why certain physiques are considered attractive for biological and evolutionary purposes, these kinds of findings can clash with each culture’s very different standards for beauty. There is more nuance and depth when it comes to understanding what makes a person attractive from culture to culture.

Indeed, beauty is in the eye of the beholder. For men and women, the concept of the “perfect” body has been influenced by mass marketing of the mainstream media, not to mention acceptance within society, with what is deemed most marketable shaping our ideas. Capitalism and social acceptance both play their parts in the shaping the concept of “what makes for conventional beauty”, in addition to the standards for evolutionary biology that have been in place since the dawn of time.

These ideals of conventional beauty vary between cultures, not to mention each individual’s own personal preferences and tastes. A lean, muscular body might be considered the perfect body in, say, some Western cultures, but in East Asian countries such as South Korea, men favour more delicate, slim and slender bodies.

“If evolutionary preferences arose a long time ago, then we would expect them to still be universal or relatively universal,” Postma admits. “Typically what they find is that there are some aspects that are universal and others that vary very much amongst cultures.

“Even if some kind of biological evolution goes slowly, cultural evolution is so much faster and you would expect a lot of variation among different cultures. That’s a research field in itself.”

For footballers, a combination of athletic success and physical appeal leads to commercial deals. This leads to them being the face of mass marketing, which has its lasting impacts on society. David Beckham and Cristiano Ronaldo are two of the most commercially successful footballers in the world, endorsing luxury brands such as Calvin Klein, Adidas, Armani, Nike, Tag Heuer.

It makes them the face of universal success.

This kind of formula for conventional male attraction, however, exhibits a “chicken or the egg?” narrative. Are these sports stars famous because they fit into the mold of what is deemed commercially successful, or have they shaped it themselves?

While they might act as a role model, to some, their cut-and-dried attributes might seem exclusionary to the wider population.

An aspiring footballer who has been told their overtly muscular physique would be better suited for American football or rugby might cause for disappointment, while someone deemed too skinny and unable to pack on the pounds to possess the kind of Greek god-worthy muscle mass might be discouraged from taking up the sport.

But just as it might seem that the standards for conventional beauty have been gate-kept by the commercial industry, there is hope that this garden-variety idea of what is marketable is changing.

Body positivity and non-traditional body sizes are continuing to be embraced, with the commercial industry very slowly - but not quickly enough - moving away from the singular vision of a stick-thin woman or the standard muscular man.

Lionel Messi is rarely included in “Hottest Male Footballers” lists, but there is no denying that he is one of the greatest living footballers on this planet.

For every way that Messi is deemed not conventionally attractive - he is shorter than most footballers (1.70 metres) and prefers not to take his shirt off to reveal his washboard abs after scoring a goal - he makes up for with his supernatural ability on the pitch.

Messi was diagnosed with a growth hormone deficiency at the age of 10, which led to him being called the cruellest of names - midget, dwarf, smurf - but his eventual nickname, “La Pulga” (the flea), described how his small stature defied expectations of what made a brilliant footballer.

Messi’s entire playing career has challenged the biological pre-requisites of success and the concept of convention in itself, which Barcelona were able to identify as they offered him a contract on a paper napkin as they had no other paper on hand.