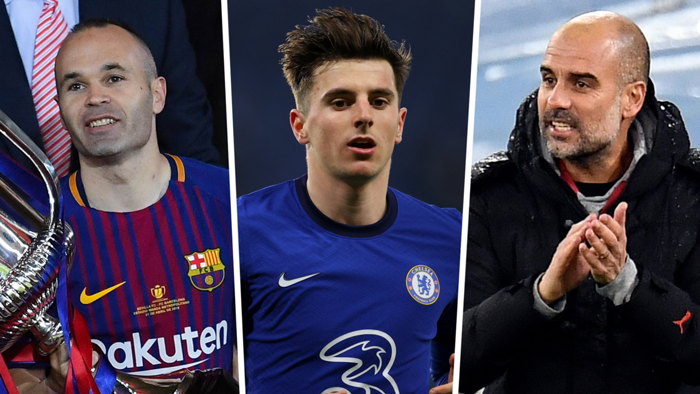 Mason Mount was never the tallest or the strongest, so he picked role models that showed it was also possible to dominate games with technical rather than physical attributes.

The young Mount would eventually have a growth spurt but he had to create a skillset at the Cobham academy based around vision and intelligence.

The traditional English footballer was all about hard tackling and strong running but times have changed.

Now 21, Mount is one of many footballers in the UK who is the result of great coaching, a determined mentality and smart career decisions.

However, as a kid, he had to look outside Chelsea for inspiration.

"Andres Iniesta at Barcelona in his prime was a player I watched, when they were playing their tiki-taka. I was always watching them on YouTube," Mount told Goal two years ago.

"I saw the Barcelona games as well. I think Barca and Iniesta were a big part of me growing up, looking at those as role models."

La Masia product Iniesta was first promoted to the Barca senior squad by Frank Rijkaard but went to a whole other level when Pep Guardiola took over as coach in 2008.

The Catalan ushered in a new era of success at Camp Nou with a high-energy, possession-orientated brand of football that relied upon smaller, skilful players that let their feet do the talking for them.

And while the publicity-shy Lionel Messi may have dominated the headlines for the ridiculous amount of goals he scored, the even more reserved Iniesta was arguably just as integral to the Blaugrana's success.

At Chelsea, Mount doesn't get much time in the limelight either but he is nonetheless an example of the benefits of hard work.

"I remember at a young age Mason never kicked the ball with his weak foot," Mount's father Tony told Goal in 2018. "I cleared my garage out and we carpeted it. We used different coloured socks and he would learn to use his weaker foot.

"He would get very frustrated at first, but then he wanted to do it and go into the garage. Now, you watch him now and he scores as many goals with his left foot as he does with his right foot."

The Premier League has become an international league with players and coaches from all over the world.

Homegrown players like Mount are highly coveted and Chelsea have another diminutive midfielder who was inspired by the Barcelona team of the 2000s.

Billy Gilmour, who joined the Blues from Rangers, was similarly inspired by what he saw on his television and on YouTube.

"I always loved watching El Clasico when I was young. I loved watching Iniesta and Xavi," Gilmour told Goal in January 2020. "Iniesta was more like my style of play. Looking at Xavi and Iniesta, that's what I wanted to focus my game on."

Guardiola has transformed Manchester City into one of the best footballing sides England has ever seen in recent years and they are travelling to Stamford Bridge on Sunday night for a key battle near the top of the Premier League.