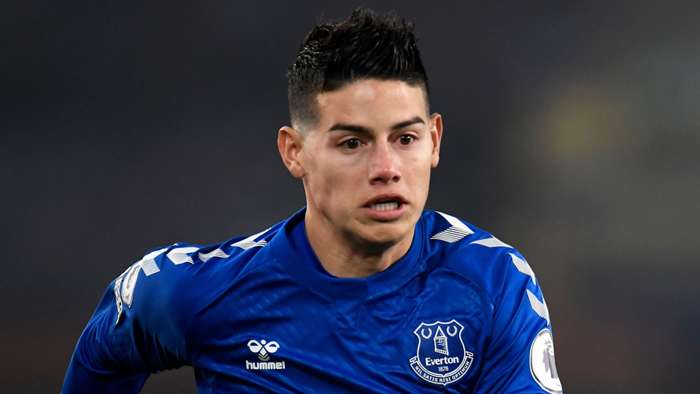 James Rodriguez is nursing “a tight calf”, Everton boss Carlo Ancelotti has admitted, with the Colombian doubtful for an FA Cup clash with Tottenham on Wednesday but expected to be ready for a Premier League date with Fulham.

It remains to be seen whether James, who was replaced in the second half of a thrilling 3-3 draw at Manchester United last time out, is able to figure in knockout competition as he seeks to shake off a slight knock.

“I think he had a little problem on his calf, a tight calf,” Ancelotti told reporters when quizzed on the 29-year-old’s fitness.

“I took him out after 70 minutes to avoid risk. Now he's going to train today.

“If he's ready to play tomorrow, he will play tomorrow - if he's not ready and if the calf is still tight, he's going to play in the next game on Sunday.

“He said that he felt the calf tight, he said to me at the end of the first-half that his calf was tight and he wanted to continue.

“I said take care of this, if you feel not comfortable then let me know. He let me know during the second-half and I took him out to avoid problem and risk.

“If he doesn't feel comfortable he won't train tomorrow and he will train Thursday, Friday, Saturday and maybe he can play on Sunday.”

James has taken in 18 appearances for Everton this season, in what is his debut campaign in English football.

He has five goals and seven assists to his name, with big things expected of the South American on the back of a high-profile switch from Real Madrid.

The classy playmaker has worked with Ancelotti in the past, with the Italian tactician taking him to Santiago Bernabeu in 2014, and that relationship has worked in the Toffees’ favour.

There is a sense that James can offer even more to the collective cause once fully adjusted to the Premier League and free of any niggling ailments, with his creative quality never in doubt.