Juventus remain reliant on Ronaldo - so how have Milan kept winning without Ibrahimovic? 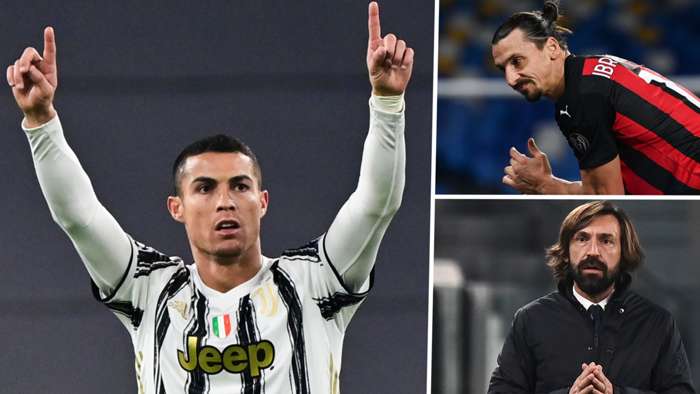 However, the accompanying video of Ibrahimovic scoring in training did notjust send fans into a frenzy.

Milan coach Stefano Pioli was also immediately bombarded with messages from giddy journalists asking if his best centre-forward could really be fit to face the champions.

In reality, while Ibrahimovic has almost fully recovered from the muscular problem which has sidelined him since November, he never had any hope of featuring at San Siro.

The widespread desire to see him play was understandable, of course.

This game was meant to be 'Zlatan versus Cristiano';a battle between two goalscoring phenomena who are defying the ageing process.

Ronaldo, 35, has struck 14 times in just 11 Serie A appearances this season; even more incredibly, the 39-year-old Ibrahimovic had scored 10 goals in just six appearances before injury interrupted his campaign.

Still, while the Swede may remain out of action, Milan against Juventus remains all about their respective superstars. After all, the way in which the Rossoneri have coped without their talismanic attacker has underlined their title credentials.

As former Milan and Juve coach Carlo Ancelotti told the Gazzetta dello Sport on Tuesday, "Ibra's absence was an exam that Milan have already passed with full marks."

Indeed, there were those that felt that when Ibrahimovic hobbled off with 11 minutes remaining in a 3-1 win at Napoli on November 22, the Rossoneri's hopes of sustaining a top-four finish would quickly collapse.

Instead, Milan have shown that while Ibra is their primary source of inspiration both on the pitch and in the dressing room, they have a squad of youngsters that are as tenacious as they are talented.

Those qualities were both on show on Sunday, when Milan overcame the loss of Sandro Tonali to a first-half red card to triumph 2-0 at Benevento.

Consequently, Milan have now accumulated 17 of a possible 21 points since losing Ibrahimovic to injury at the San Paolo.

What isarguably even more remarkable is that the only unbeaten team left in any of Europe's 'Big Five' leagues have managed to maintain their remarkable scoring record.

Pioli's players have racked up two or more goals in each of their last 17 games – the best run in Serie A history – with the likes of Rafael Leao coming into their own.

The net result is that Milan go into matchday 16 as Serie A leaders, and a whopping 10 points clear of defending champions Juve in fifth.

Andrea Pirlo's side have a game in hand, against fourth-placed Napoli, but never before have the Rossoneri held such a lead over their rivals during the first half of a season.

Wednesday's contest, then, represents a unique opportunity for Milan to strike a decisive blow to the Old Lady's hopes of a 10th successive Scudetto.

It certainly cannotdecide the title race – the Rossoneri are just one point ahead of Antonio Conte's resurgent Inter – but it could well eliminate the Bianconeri from the reckoning.

In that sense, it is a far bigger game for Juve than Milan; the visitors really need to win to kickstart their campaign.

So, it isjust as well that they will arrive at the Giuseppe Meazza with arguably the game's most reliable match-winner leading their line.

Milan may have made do without Ibrahimovic, but Juve would arguably be lost without Ronaldo.

The Portugal legendaccounts for 48 per cent of the Bianconeri's Serie A goals this season (14/29). In addition, they drew all three of the games he has missed to date, against Crotone, Verona and Benevento.

Pirlo has unsurprisingly attempted to rationalise his team’s obvious reliance upon the five-time Ballon d’Or winner.

“From the beginning we tried to exploit Ronaldo for his characteristics,” he told reporters on Tuesday. “We wanted to have him be decisive in the last few metres in front of goal.

“He was decisive at every club, though, so it’s normal that when you have a champion like him, you depend on him.”

They will certainly need him to deliver at San Siro.

Milan may be missing Ibrahimovic, while Tonali’s suspension for his red card at Benevento has left Pioli desperately short on options in midfield, with Ismael Bennacer still unavailable through injury.

However, Theo Hernandez’s return is a colossal boost for the youngest squad in Europe's top leagues, given the former Real Madrid man is this season rivalling Andy Robertson for the title of the world’s best left-back.

It iseven more significant when one considers that Juan Cuadrado– Juve’s first-choice right-back and one of their better players in 2020 – has contracted Covid-19 and is, therefore, ruled out for an unspecified period of time. The Bianconeri would have been banking on the Colombia internationalto have the pace and stamina to deal with Theo’s relentless marauding down the left flank.

Juve could yet have Alvaro Morata back up front, but Pirlo is pessimistic about the Spaniard’s chances of making the bench, let alone starting.

Paulo Dybala is instead expected to be paired with Ronaldo in attack, and the struggling Argentine will have been buoyed by his late goal in Sunday’s 4-1 win over Udinese.

Juve’s hopes of victory, though, will rest on Ronaldo, and he will know that they cannot squander this chance to derail Milan’s title charge.

The Rossoneri have coped wonderfully well without Ibrahimovic, but they willbe even better when he returns.

Juve’s time to take advantage of his absence is clearly running out.