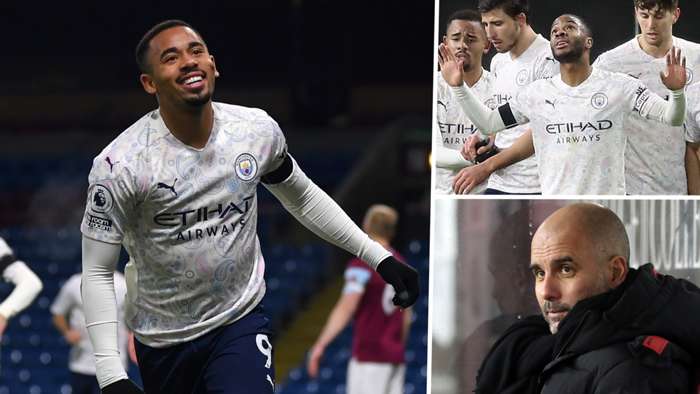 Guardiola's side ticked off a 13th successive victory in all competitions with another ruthlessly efficient display in their 2-0 victoryover Burnley on Wednesday.

The City players are back in the frame of mind where they expect to win every time they step out onto the pitch, and it will be no different when they head to Anfield to take on Liverpool on Sunday.

Winning on Merseyside would prove a huge step towards reclaiming the title for Guardiola's team, but it will serve as the biggest test of his new-look system yet, with 'Man City 2.0' having mostly brushed aside the league's basement dwellers over the past month or so.

It was back in April 2019 that Guardioladescribed playing at Turf Moor as similar to "going to the dentist", but here it proved to be more of aroutine procedure for the visitors as they moved three points clear at the top of the table.

The dominant performance showed how much they have progressed after a mediocre opening few months of the season, with Guardiola's tweaks undoubtedly paying off.

From back to front, City are well-drilled.

They have agoalkeeper in Ederson who now has 13 league clean sheets this season and looks set tothreaten Petr Cech's all-time Premier League record of 24 in a single campaign.

In front of him he has adefence that has conceded just once in eight games, while further forward those in midfield and attackhave been mesmerising in their control and creativity.

City spent 90 minutes here picking holes in the Burnley defence, leaving the Clarets shattered at full-time after their attempts to plug them for the most part failed.

Sean Dyche set uphis side to be typically well-organised and stubborn,and they did everything they could to disrupt City's rhythm, but they were never realistically in the game once Gabriel Jesus had headed Guardiola's sideinto a second-minute lead.

Bernardo Silva, who was so pivotal in the 2018-19 title run-in, is one of those back to his best, and he found a small space inside the box to whip in a shot that was spilled byNick Pope for Jesus to finish.

The points were safe by the38th minute when Ilkay Gundogan dashed behind the Clarets defence to drill in a low cross that Raheem Sterling tapped in from close range for his 99th goal of Guardiola's reign.

Germany international Gundogan has been outstanding all season, and stepped up as the creator-in-chief here in the absence of the injured Kevin De Bruyne.

It helps when he is surrounded by willing runners, with bothSterling and Riyad Mahrezconstantly stretching the home defence. It was a shame that the latter had a picture book goal ruled out for a narrow offside in the second halfafter City's precision passing had toyed with the Burnley defence.

It has taken 18 months, but Guardiola has his teamback to their best, with the belief and quality that is difficult for any side to live with, including Liverpool.

City have won just once at Anfield in the last 40 years, but they will have never have a better chance to add their only Premier League victory there back in 2013.