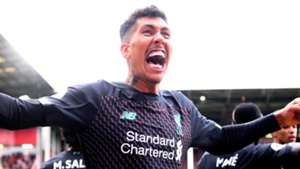 Losing Roberto Firmino would be a bigger blow for Liverpool than seeing Mohamed Salah or Sadio Mane ruled out, claims Jason McAteer.

The Reds saw Salah take a knock against Leicester on Saturday, with a robust challenge from Hamza Choudhury forcing the Egyptian from the field.

There is now an international break in which to recover, with Salah not called up by Egypt for their latest outings.

Keeping Salah fit will be crucial to Liverpool's title challenge, as they now sit eight points clear of defending champions Manchester City, but McAteer says he is not the most important part of a well-oiled attacking machine.

The former Reds star told The Racing Post: "People have questioned Liverpool's strength in depth and I don't think it's quite as strong as Manchester City's, but there is cover in key areas.

"Take one of their star players out of the team and inevitably it has an impact - it would at any club. But Jurgen has been able to tweak things and bring in different players and look where they are.

"The one player I think is indispensable going forward is Roberto Firmino. Forget Sadio Mane or Mo Salah, it's Firmino who makes the whole thing tick going forward. I think if Liverpool lost Firmino it would have a bigger impact than losing Mane or Salah.

"Look at the Super Cup against Chelsea where Liverpool produced two completely different halves of football, the first without Firmino and the second with him. He's a more important part of the attacking jigsaw than anyone else."

While proven performers remain integral to Liverpool, the club have produced an exciting crop of academy graduates.

They will have important squad roles to play under Jurgen Klopp, with McAteer adding on those coming through the system and a home-grown star already established as a key man: "Some of the current crop of kids look exceptional.

"Curtis Jones is coming through and Harvey Elliott, who's only 16, looks fantastic, Adam Lewis is on the rise and there's Rhian Brewster, plus others. They could all become first-team regulars and they only need to look at Trent Alexander-Arnold for evidence of that.

"Trent was a centre midfielder who wanted to play centre-half and ended up on the right of defence. Nathaniel Clyne got injured and Trent got thrown in at the deep end and started swimming. [Nathaniel] Clyne couldn't get back in and Trent has now won the Champions League and is probably England's regular right-back and playing every game for Liverpool. And he's still only 21.

"You need that little bit of luck to get in the first team and then show you can handle the pressure and I'm convinced a few of them will be able to do that."