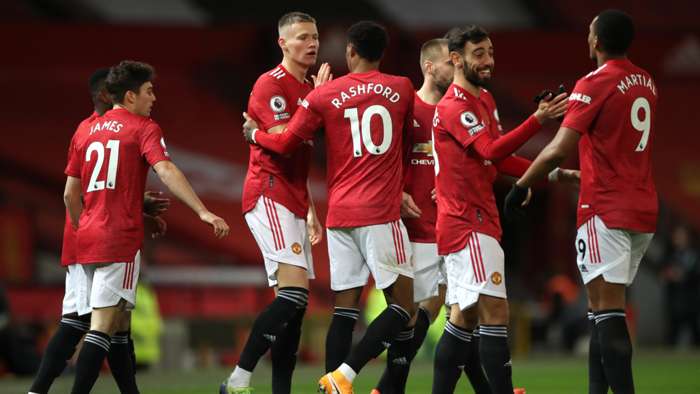 Manchester United have a "lot of match-winners" now, according to Gary Neville, who hopes the Red Devils can "tweakLiverpool's tail"in the coming weeks.

Ole Gunnar Solskjaer's side have won six of their last eight games, including a 2-1 home victory over Aston Villa on Fridaywhich saw them move level on points with the defending champions at the top of the table.

Liverpool can restore their three-point advantage if they beat Southampton at St Mary's on Monday night, but United still have a game in hand to take in away at Burnley on January 12.

The two clubs currently setting the pace in the top-flight will meet at Anfield five days later, with Neville relishing the prospect of the heavyweight showdown after seeing his old club rediscover a consistent streak.

The Red Devils legend thinks Solskjaer has assembled a squad good enough to compete with the very best, and although he acknowledges there is still plenty of work to be done, the former defender is encouraged by the "spirit" the team has shown in recent weeks.

"It was a big, big win for United," Neville said on his Sky Sports podcast while assessing United's position following their win against Villa.

"I'm so looking forward to that Liverpool game. Not because I'm here thinking United can go to Anfield and win, but because United have become competitive out of nowhere.

"I remember sitting at Old Trafford after that Manchester derby goalless draw, sat with Roy Keane and Micah Richards, saying that Chelsea, Liverpool and Tottenham were far ahead of the two Manchester clubs at this moment in time.

"If you'd have said at the start of the season, or even five weeks ago, that United would be level with Liverpool, I'd have said no chance, that can't happen.

"They do it in moments, and they don't always have to be playing well when you have those players on the pitch.

"The performances are getting better, it's a work in progress, it's not by any stretch the finished article. At times in games they mesmerise you for 10 minutes, and then can turn into a nightmare for 10 minutes, but there's confidence building, something is growing, there's a spirit at the end of the game with the players celebrating was nice to see.

The 45-year-old pundit added:"I think a couple of years ago I said quite publicly at times there was a team I didn't like watching wearing those red shirts. I see them now, and I felt last season they looked a lot happier, and this season they seem happier again.