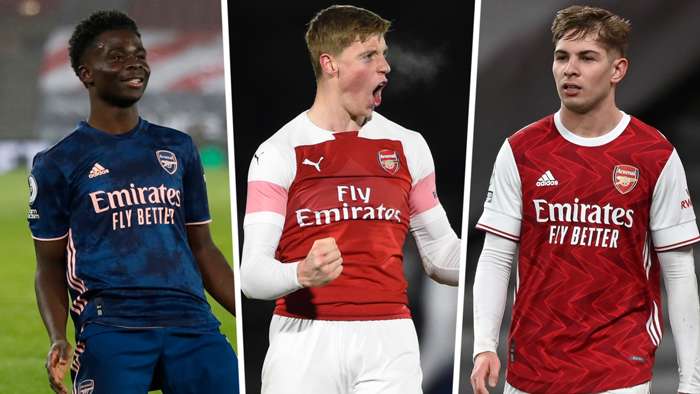 Mark McGuinness believes he can become the next Arsenal academy success story, with the 20-year-old defender looking to follow in the footsteps of Bukayo Saka and Emile Smith Rowe.

McGuinness faces enough competition for places at present that he has opted to head out on loan at Ipswich, but the intention is to catch the eye at his parent club in 2021-22.

“That’s my goal,” McGuinness has told football.london on his ambition of becoming a senior star at Arsenal.

“I’ve been at the club since I was 10 and that hasn’t changed. I’ve always wanted to play for Arsenal’s first team so that will never change.

"What I’m doing now is experience and hopefully I can kick on. My goal is to come back and try and get myself into the side.

"Obviously there’s other factors with other centre-halves in the first team and things like that, but that doesn’t stop me trying to get into the first team which is what I will try and do.

Saka has become a senior England international in 2020-21 with the versatile 19-year-old now a key man for the Gunners, making31 appearances across all competitions.

Classy playmaker Smith Rowe is another to have earned a big break, with the 20-year-old midfielder hitting two goals through 18 outings.

Reiss Nelson and Eddie Nketiah remain part of the first-team fold in north London, while Joe Willock saw more minutes before linking up with Newcastle on loan in January.

Ainsley Maitland-Niles is another home-grown star to have left Emirates Stadium for now, with the 23-year-old midfielder set to see out the 2020-21 campaign at West Brom.

The promising centre-half could see a path cleared for him at Arsenal.

Sokratis and Shkodran Mustafi have already departed, while questions are being asked of Calum Chambers and Dinos Mavropanos’ future.

David Luiz is another that may head through the exits, with the veteran Brazilian set to see his current contract expire in the summer.

McGuinness will hope that his chance comes at some point, with Rob Holding and Gabriel Magalhaes among those to be nailing down starting berths under Arteta.