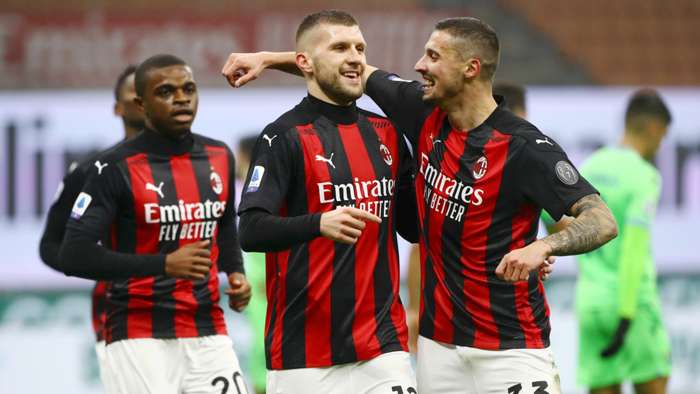 Milan pair Ante Rebic and Rade Krunic have tested positive for Covid-19 ahead of Wednesday's showdown with Juventus.

The news comes on the back of Juve announcing that full-backs Alex Sandro and Juan Cuadrado had contracted COVID-19, also ruling them out of the crunch clash at San Siro.

Rebic has featured 14 times for Milan in all competitions this season, while Krunic has been used on 20 occasions.

The pair have appeared together in eight Serie A matches this season, with Milan winning each of those games. On the seven occasions they have not featured, meanwhile, the Rossoneri's win rate drops from 100 per cent to 43.

The club said in a statement: "AC Milan announces that Ante Rebic and Rade Krunic tested positive for a molecular swab carried out yesterday in anticipation of the match against Juventus.

"The players, asymptomatic, remained in isolation at home where a second control swab was taken today. The health authorities were promptly informed.

"All members of the team group underwent a further test today with negative results."

Speaking on Tuesday, doctor Roberto Testi, the director of the Department of Prevention at the Turin ASL, warned the high-profile contest may be called off if Juve report further positive tests on the day of the game.

"If there should be more positive tests and the evidence of an uncontrolled breakout within the squad, that would become a problem of safety for the other players," he told Corriere della Sera.

"Clearly, at that point, the ASL would be forced to intervene, isolating everyone and blocking Juve's departure towards Milan."

Milan enter the game 10 points better off than reigning champions Juventus having played a game more.

Stefano Pioli's men won the most recent encounter between the sides 4-2 last July and are seeking successive league wins in this fixture for the first time since 2010.