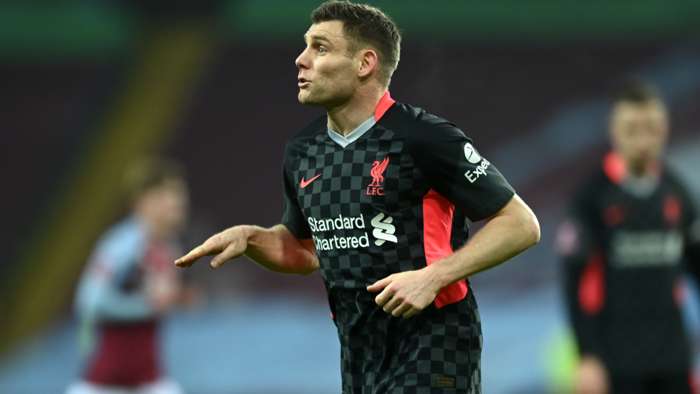 James Milner has praised the spirit, determination and talent of Aston Villa’s young players despite their 4-1 FA Cup defeat to Liverpool.

It meant U23 coach Mark Delaney took charge of a youthful side that had an average age of just 18 years and 294 days. Five of the starting XIweren’t even born when 35-year-old Milner made his first ever FA Cup appearance, for Leeds againstScunthorpe in January 2003.

Speaking after the game the veteran Reds player only had words of praise for his beaten opponents.

"A good set of lads, honest, worked hard for each other, quality,"he told BT Sport."They put a shift in – we expected that, we didn't want to take it for granted.In the first half they got the goal to keep playing. We got the result in the end but I think it's not an ideal situation for either team."

Liverpool boss Jurgen Klopp unsurprisingly made changes to his team from their last Premier League game, though the starting XI still included the likes of Sadio Mane, Mohamed Salah and Jordan Henderson.

It looked set to be a long evening for Villa when Mane gave Liverpool the lead after just four minutes. However, they slowly battled their way back into the game and were rewarded with a stunning equaliser from 17-year-oldLouie Barry before half-time.

Klopp looked to be growing increasingly frustrated as Villa continued to hold their own after the break, before their resistance was finally broken on 60 minutes when Gini Wijnaldum found the back of the net with an effort from the edge of the box.

Further goals from Mo Salah and a second of the game from Mane extended Liverpool’s lead as their class and fitness finally told, though the Villa youngsters can hold their heads high after putting in a spirited display.

"I think obviously we needed to do some things better," added Milner."I think we started pretty well with the counter-pressing and pressed on the ball, but then maybe didn't get it right – especially for the goal we let them out of a couple situations in the corner where they shouldn't have got out.

"They're good players, they're at Aston Villa for a reason.One of their lads said he hadn't played for two months.