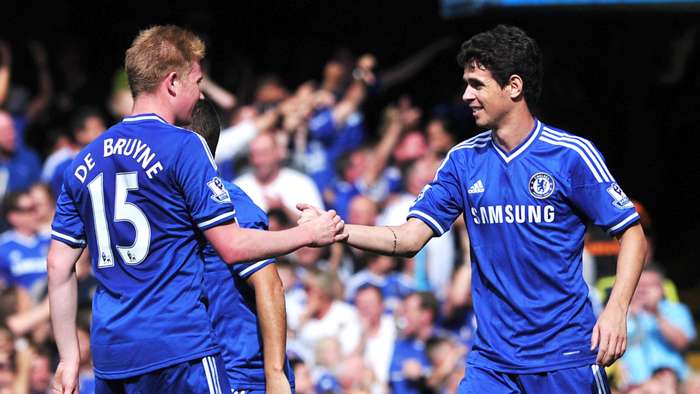 Former Chelsea star Oscar has revealed why he believes ex-team-mates Kevin De Bruyne and Mohamed Salah failed to make the grade at Chelsea.

During his time with Chelsea, Oscar played alongside both De Bruyne and Salah, two players that were eventually sold by the Blues only go on to become Premier League stars elsewhere.

De Bruyne has since become a Premier League-winning midfielder with Manchester City, while Salah has been a key piece in lifting Liverpool to Champions League and domestic crowns.

Oscar says that he believes that De Bruyne's lack of consistency and Salah's shyness impacted their time at Chelsea, preventing them from being stars under Jose Mourinho.

“De Bruyne even gave me an assist,” Oscar told Yellow and Green Football. “There was a formation where Eden Hazard, De Bruyne and I played in midfield and it worked well. He only had a few chances, played well but then got injured. I guess that not being consistent at a club that had many options in the centre of the park meant he was not a good fit at the time.

"With Salah, it was different. He was unstoppable during practice, but always shy and quiet off the field. During the games, I guess he did not have the confidence that we saw at every club he played for after Chelsea, and especially now at Liverpool.”

He added:“Sometimes players don’t feel comfortable with that pressure. I liked it because it made me better.

"Mourinho helped me a lot and he is one of the best coaches in the world. He gives a lot of confidence to his players, but also wants to see them perform at the level of that trust.”

De Bruyne has gone on to win two Premier League titles as part of an eight-trophy haul with Manchester City, earning honours as Premier League Player of the Season in 2019-20.