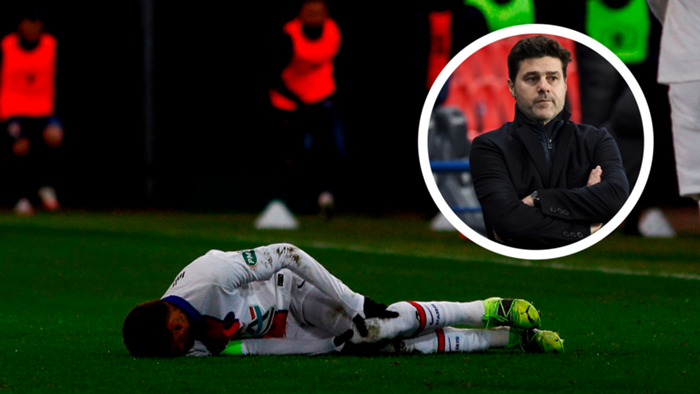 Neymar is in danger of missingParis Saint-Germain's Champions League knockout tie against Barcelona next week, managerMauricio Pochettino admitted, and the injury he suffered may have been the result of a "lack of protection" from referees.

The forward exited the pitch in pain during the second half of a Coupe de France match with Caen on Wednesday, heading straight down the tunnel for treatment.

Now, PSGmust wait on further testing to the attacker'sleft adductor region to determine whether he can feature in the crucial first leg of the Champions League last-16 clash.

“We'll see tomorrow with the doctor," Pochettino told Eurosport. "At the moment it’s difficult to say. Can he be there next week? I need more time and more info to find out."

About the refereeing, Pochettinoadded in his press conference, "I don't want to take it out on the way the opponent played and the way Neymarplayed his game. But I just have the feeling that sometimes there is a lack of protection during matches from refereeing. But it's just a feeling."

Pochettino said he did not regret picking Neymar in the Coupe de France contest, noting Neymar"was in perfect condition to play today."

Neymar missed several weeksearlier in the campaign because of a small tear in his left adductor, which is part of the groin area. After Wednesday's match, Pochettinoconfirmed his latestinjury was also to the adductor, though most of the specifics remain unknown.

Neymar also battled ankle problems at the turn of the year.

If Neymar is ruled out of the Barcelona match, it would leave PSG down two starting attackers. WingerAngel Di Maria is already sidelined with a muscle issue.