Pope Francis: Maradona was a poet, a great champion and a very fragile man 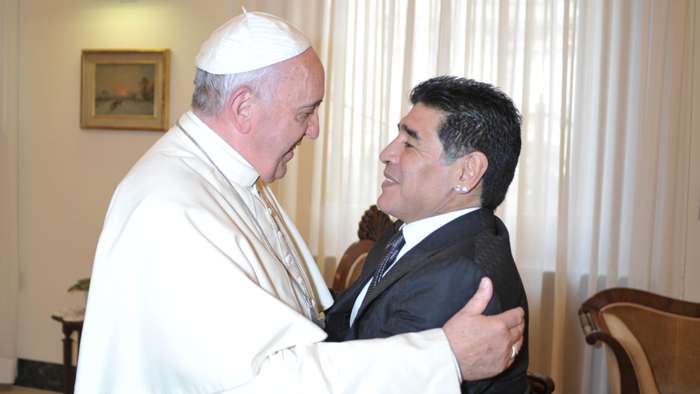 The late Diego Maradona was a man beloved by his fellow Argentines – and Pope Francis is seemingly no exception.

He told the Gazzetta dello Sport: "I met Diego Armando Maradona during a Match for Peace in 2014: I remember with pleasure everything that Diego did for Scholas Occurrentes, the foundation that takes care of the needy all over the world.

“On the pitch he was a poet, a great champion who gave joy to millions of people, in Argentina as in Naples. He was also a very fragile man.

“I have a personal memory linked to the 1986 World Cup, the one that Argentina won thanks to Maradona. I was in Frankfurt; it was a difficult time for me, I was studying the language and collecting material for my thesis.

“I hadn't been able to see the World Cup final and I only learned the next day of Argentina's victory over Germany, when a Japanese boy wrote 'Viva l'Argentina' on the blackboard during a German lesson.

“I remember it, personally, as the victory of loneliness because I had no one with whom to share the joy of that sporting victory: loneliness makes you feel alone, while what makes joy beautiful is being able to share it.

“When I was told of Maradona's death, I prayed for him and sent the family a rosary with a few personal words of comfort.”

Pope Francis also spoke about his own love of football, from playing with a ball of rags on the streets of Buenos Aires as a child.

"I have a memory, that of the ball of rags, the pelota de trapo: leather was expensive and we were poor, rubber was not yet so common, but it was enough for us - a ball of rags to have fun and almost perform miracles playing in the square near home.

“I was not among the best! Indeed, I was what in Argentina they call a "pata dura", literally ‘hard leg’. That's why they always had me playing in goal.