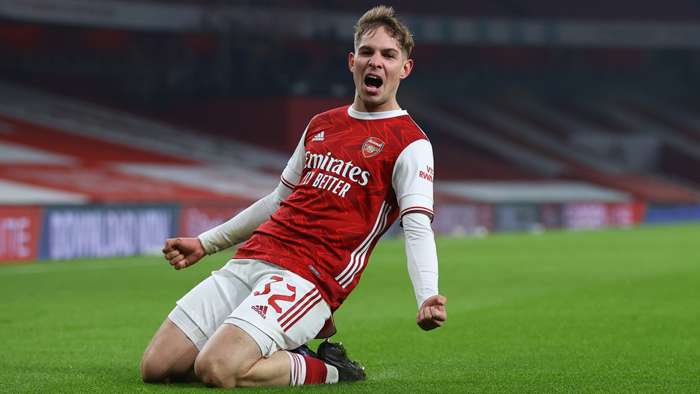 Mikel Arteta has backed Emile Smith Rowe to come into England contention, with the Arsenal boss looking for another product of the Gunners’ academy system to follow Bukayo Saka’s lead.

Smith Rowe is among those to have seen regular games and Arteta believes the talented 20-year-old can force his way into Gareth Southgate’s plans ahead of this summer’s European Championship.

“I think it is possible if he shows the same determination as Bukayo, be as humble as he is and play with the personality that he’s done, I think he’s got a great chance,” Arteta told reporters on Smith Rowe.

“Emile has got all the attributes, all the qualities that’s needed to play for this football club and, in my opinion, to play for the national team.

“After it is about finding the consistent level that is required, because obviously that level is as good as it gets. But I think he has shown in moments of this season what he can do.

“So it is about now doing it for longer periods, adding more assists, more goals, being a threat all the time and working as hard as he has been doing because I think he has been phenomenal for us.”

At just 19 years of age, the versatile London native has enjoyed a meteoric rise to prominence.

Saka only made his Premier League debut on New Year’s Day 2019, but is now up to 73 appearances for the Gunners and has become a key part of the first-team set-up.

His efforts down the left flank, at either full-back or on the wing, have not gone unnoticed, with a new long-term contract committed to at Emirates Stadium.

International recognition has also come his way, with a senior bow for England made in a 3-0 victory over Wales in October 2020 – a month after he had represented the Three Lions at Under-21 level for the first time.

Saka faces competition from the likes of Luke Shaw and Ben Chilwell at left-back, but could get the nod from Southgate if a wing-back system is favoured.

In the playmaker posts that Smith Rowe will have his eye on, England are blessed with a number of exciting options.

Jack Grealish, James Maddison and Mason Mount are all serious contenders for a No.10 role, while the likes of Phil Foden and James Ward-Prowse could figure in that spot if required.