Spurs would be in 'impossible situation' if more matches postponed due to Covid-19, warns Mourinho 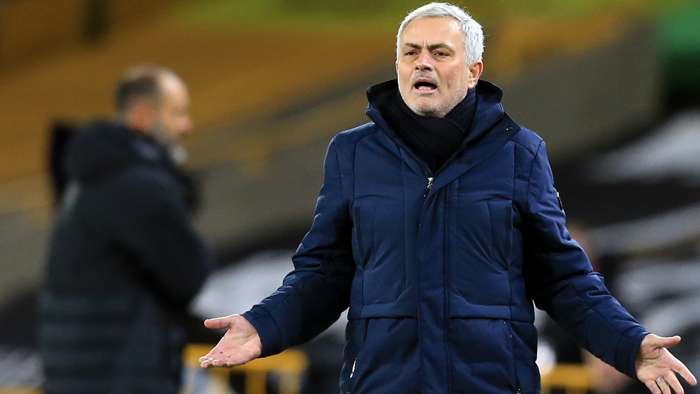 Jose Mourinho has warnedTottenham would be left in an "impossible situation" if their game at Aston Villa is postponed due to Covid-19,and called on the Premier League to show "leadership".

Spurs have already had a derby at Fulham called off on December 30 after the Cottagers were hit by the virus and a scheduled trip to Villa Park next Wednesday is now in doubt.

Tottenham will also face Manchester City at a later date of April 25 due to the pandemic and given they are fighting for honours on four fronts, Mourinho suggested they would refuse to accept any more postponements.

Speaking ahead of Sunday's FA Cup tie at Marine, he said: "I believe that is a completely impossible situation for a club to have three matches postponed, especially if that club plays in Europe. If that club doesn't play in Europe, of course there are the UEFA fixtures.

"For aEuropa League team to have three matches postponed is impossible. Completely impossible. That's the only thing that I can say."

Asked about the prospect of facing Fulham instead of Villa, he added: "I don't know. It's not for me to find solutions. I'm not going to lie to you, I've been doing that hypothetical exercise with my staff.

"Of course, we have no influence and we don't want to have influence. The only thing that we can say is that what we did in the beginning of the season is impossible to repeat and we refuse to repeat.

"We have to defend our players, the integrity of our competitions and we would never accept to play seven matches in three weeks like we did before. One thing is the beginning of the season, another thing is mid-season.

"We cannot be put in an impossible situation. To have three matches postponed,it isthe moment for the Premier League to show leadership, make decisions, that of course a club like us, is trying every day to be ready to play, to follow the rules that we had in our hands.

"We cannot be punished. If we don't play against Aston Villa, we will have three matches postponed and that is impossible. Because after the season we have the Euros, and of course the matches cannot be moved."