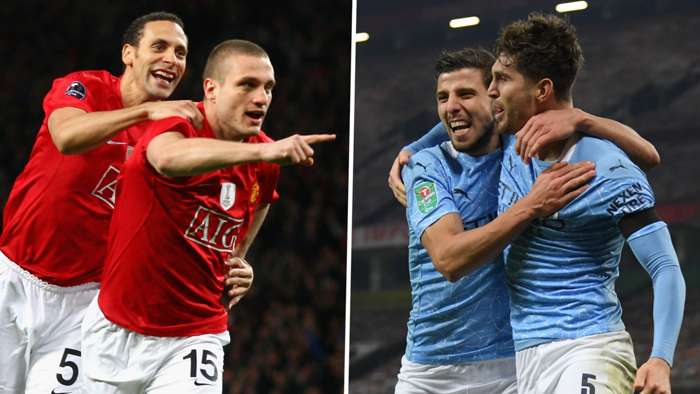 The blossoming centre-half partnership between Ruben Dias and John Stones at Manchester City means the Blues could have the new Nemanja Vidic and Rio Ferdinand on their hands, says Trevor Sinclair.

Vincent Kompany was once a talismanic presence for City, but his injury struggles and subsequent departure in 2019 left a sizeable void for any alternative options to fill.

Big money has been thrown at trying to fix those problems, with recent windows seeing Aymeric Laporte, Dias and Nathan Ake snapped up.

The England international has struggled for consistency throughout his time at the Etihad Stadium, sparking exit talk on a regular basis, but a welcome return to form is being enjoyed at present.

The 26-year-old is flourishing alongside Portuguese star Dias, with Sinclair seeing similarities between a City pairing of the present and a legendary Manchester United duo of the past.

“If you look at the possession against some teams, it’s not what it used to be. They’ve got a possession-based game where they’re dictating and getting in the final third, but also if they’re not having any joy with that they’ll sit back.

“Because they’re so confident with John Stones and Ruben Dias they’ll sit back and like we’ve seen in that 15 minutes at Chelsea, they’ll hit you on the break. They’ve got speed going forward and if you give them half a pitch to work in they’ll go and destroy you.”

On the Stones/Dias partnership, Sinclair added: “It’s been outstanding. It kind of reminds me of when Vidic and Rio were together – one of them would make a block and they’d high five each other.

“It just seems they’ve got that kind of relationship and chemistry where they respect each other.

“They look like they’re a really good contrast of players; one of them wants to head the ball, Ruben Dias is a really good talker and John Stones’ stats… he’s played eight, won seven and drawn one and lost none.

“He’s got 93.4 per cent pass accuracy – that’s number one in the league – and this season he’s played 10, won nine, drawn one and lost none. When he’s not in the starting XI, they’ve played 15, won eight, drawn five, lost two.

“It’s there in black and white. It’s great, he’s had difficult times and been in the media for the wrong reasons, he’s been dropped from the England squad but he seems to have got his life together and it’s back together on the pitch.