'Truly extraordinary' Haaland will get even better, says Nagelsmann 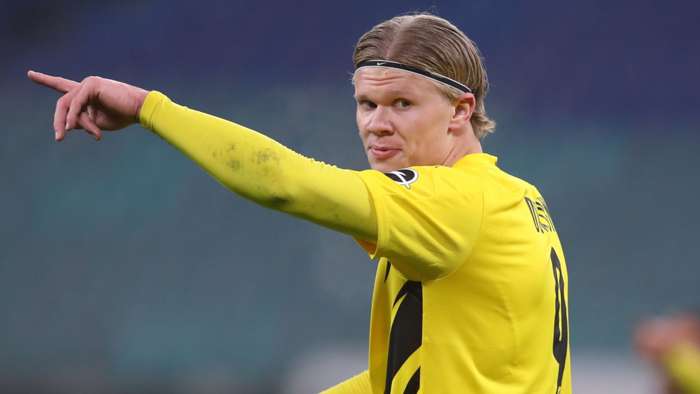 JulianNagelsmannbacked Erling Haaland to get even better after his RB Leipzig team were on the receiving end of a masterclass from the Borussia Dortmund striker.

The brace took Haaland's Bundesliga total to 25 goals in 25matches, of which only 20 have been starts. He has netted with a hugely impressive 34.3 per cent of his shots, too.

BVB's opponents on Saturday were also interested in Haaland when he left Salzburg and coachNagelsmannacknowledged his latest performance was evidence of why he was so sought after.

He also pointed to the talent around Haaland in the Dortmund team to explain why it is so difficult to deal with one of Europe's standout stars.

"Erling we could have defended,but not if the players around him have too much space in a one-against-four situation,"Nagelsmannsaid.

"Of course, he is an exceptional striker - this is why we wanted him, too. Dortmund got him.

"I think he just scored 25 goals in 25 Bundesliga games, something like that. This is truly extraordinary. Unbelievable stats."

Haaland had also scored twice against Leipzig in the sides' meeting at the end of last season.

Nagelsmann added: "This is not the first goal he scored against us. He has some serious quality and is very young.

"So, I think I can't judge him as well as our opponent but he for sure has some potential to develop. He will get even better.

"And the league will have a lot of joy with him. Not the opponents, though."

With severalclubs across Europe interested in Haaland, Dortmund CEO Hans-Joachim Watzkeexpressed his belief this week that the strikerwill stayfor at least one more season.