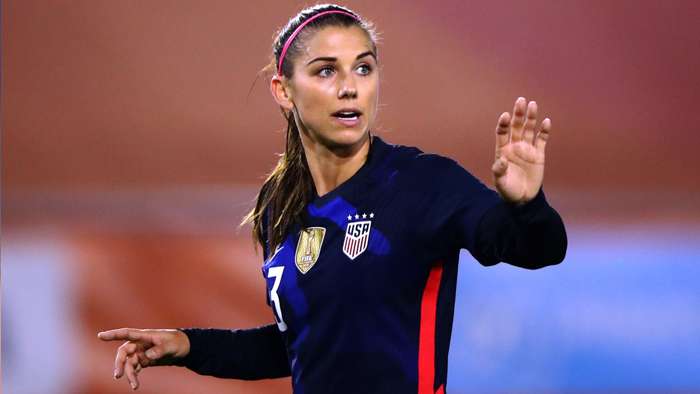 U.S. national team striker Alex Morgan has revealed that she and her family have tested positive for Covid-19.

It wasn't immediately clear whether Morgan's husband Servando Carrasco and infant daughter Charlie were both also infected, or if other family members caught the virus as well.

"Unfortunately, my family and I closed out 2020 learning that we had contracted Covid while in California over the holidays," Morgan said on Twitter.

"We are all in good spirits and recovering well. After our isolation is completed, I will follow US Soccer's return to play guidelines to ensure my body is fully recovered and I can join my team-mates back on the field soon. Be safe and happy new year."

Morgan now appears unlikely to be included on Wednesday when the USWNT announces their rosterfor their January training camp.

The 31-year-old is the second high-profile USWNT player to contract Covid-19 recently, with Lindsey Horan removed from the roster for November's friendly againsttheNetherlands after testing positive. Horan has since recovered.

Morgan joined Tottenham in September, leaving her NWSL side Orlando Pride on a short-term deal.

The strikermade just five appearances for the club, scoring two goals, as she battled a knee injury during her time in the Women's Super League.

Morgan was also working her way back to fitness after she gave birth to Charlie in May.

Morgan had initially planned onaiming to return to the field in time for the Tokyo Olympics last summer, but was given a reprieve as the competition was pushed back by a year due to the pandemic.

“I definitely feel like I have been able to really just take a step back and go on my own timeline which has been so nice and so unexpected,” Morgan said in aninterview with U.S. Soccer in November.“When I first got pregnant it was going to be the complete opposite.”