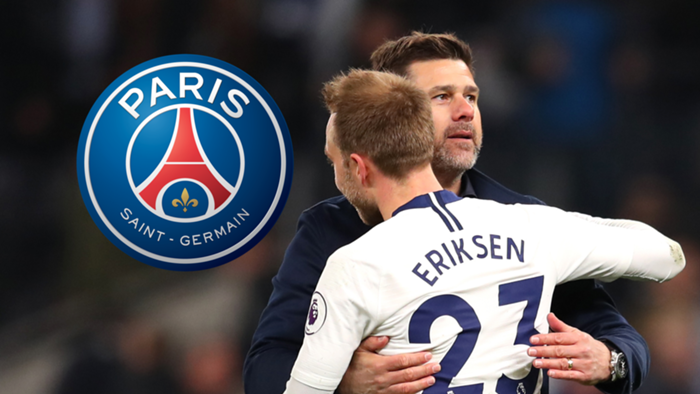 In his first press conference on Tuesday, Pochettino fielded a series of questions regarding player transfers, including a potential move for Lionel Messi, who is free to leave Barcelona this summer.

Another player Pochettino was questioned on is Christian Eriksen, who played for the new PSG boss for five full seasons with Spurs.

The Danish midfielder became a star in north London, scoring 69 goals in 305 appearances for the club.

However, shortly after Pochettino's departure, Eriksen sealed a move to Inter as his contract winded down, moving to Italy on a four-and-a-half-year deal.

His time in Serie Ahas not gone to plan, though, as Eriksen has fallen out of the picture under Antonio Conte.

The midfielder has made just 11 appearances this year, scoring zero goals, after scoring four times in 26 outings last season.

Inter are already looking to get rid of the former Spurs star, with club CEOGiuseppe Marotta confirming last month thattheplaymaker will be transfer listed in January.

"He has struggled to settle into the squad, he is not functional to the squad. That’s just an objective fact," Marotta told Sky Italy.

When asked about the possibility of bringing Eriksen to Paris though, Pochettino would not confirm or deny his club's interest.

“This is not the time to comment on rumours, we just arrived a few days ago," he said in a press conference.

"We are monitoring the recovery of our injured players, we are talking with Leonardo and it is true that a club like PSG is looking at all the possibilities it has, all the more so with this complicated period linked to the health crisis."

PSG currently sit third in Ligue 1, one point behind both league-leaders Lyon and second-placed Lille.