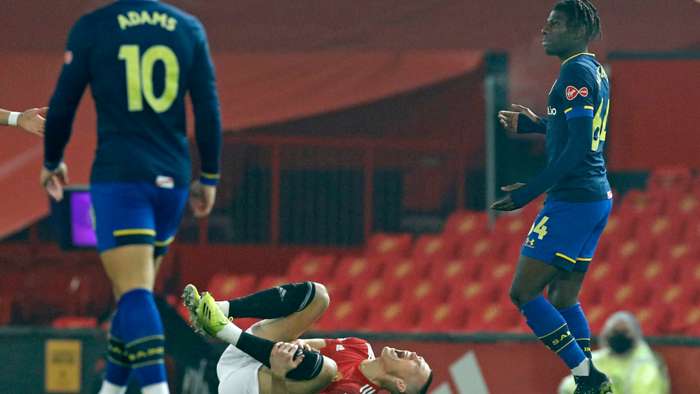 Southampton manager Ralph Hasenhuttl did not hide his displeasure with Alexandre Jankewitz after the 19-year-old was sent off for a horror challenge just two minutes into Tuesday's match at Manchester United.

Hasenhuttl's side did not deal well at all with going down a man, eventually losing 9-0 in a record-tying thrashing that saw them end the match further reduced to nine men.

The Saints boss said that his side's second red card, shown to Jan Bednarek for a foul in the box on Anthony Martial long after the outcome had been settled, disappointed him more thanJankewitz's foul.

ButHasenhuttl also didn't hold back onJankewitz, who is the first player to be sent off on his first Premier League start since Serge Aurier for Tottenham in September 2017.

"One man down after three minutes against this opponent, congrats to Man Utd and they worked us off the field and did not stop scoring,"Hasenhuttl told BBC Sport."The second red card is most disappointing, we don't have any more players.

"Jan Bednarek does not kill him but I do not want to speak about the referee. Last week he was our VAR and made his mark in the game.

"It was a stupid foul from the young lad and kills everything.

"When you come here with two goalkeepers on the bench, I wanted to give a few young lads a chance to show up. When I have seen what is going on it is better to take them out because 9-0 on a debut is not a good score to have.

"We tried in the second half to keep a clean sheet as much as we could but at nine men it was too easy for them to score."

Speaking about Jankewitz'schallenge to BT Sport, United head coach Ole Gunnar Solskjaer added:"You don't see many of those tackles anymore. I'm glad Scott is well and he's got away with just a couple of bruises."

Unfortunately for Hasenhuttl, Tuesday wasn't the first time he had been at the helm of a 9-0 defeat as Southampton manager.

Saints also fell by nine goals to Leicester City in October 2019, withHasenhuttl leading his side to an impressive turnaround following that defeat. The Austrian is hoping to engineer a similar outcome this time around.