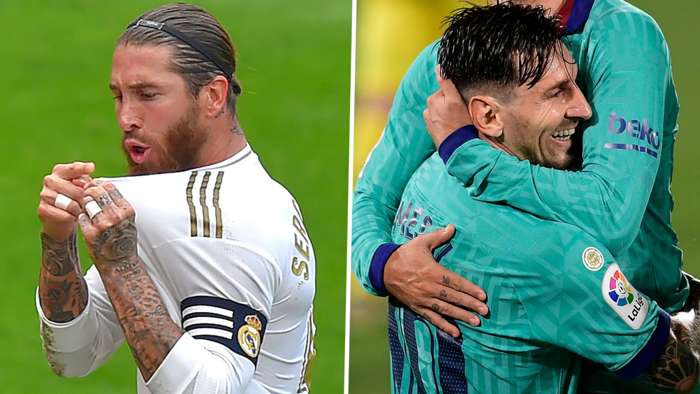 As footballers go, Lionel Messi and Sergio Ramos could not be much more different.

One is the ultimate magician with the ball at his feet. The other a true master of the defensive dark arts.

What they have in common, however, is their will to win.

There is an argument to be made that no players want to win more within La Liga than Messi and Ramos. At the very least they are the individuals who most allow their emotions to manifest themselves in their body language on the pitch.

Over the past week, the opposing captains of Real Madrid and Barcelona have found themselves at the heart of the Liga title race.

Messi has beenploughing almost alone furrow in terms of Barca’s challenge, with Quique Setien’s side failing to inspire for the majority of games post-lockdown.

The mercurial Argentine has cut a dejected figure for much of the past four weeks as a two-point lead at the top of the table has become a four-point deficit with just a quartet matches left to play.

Factor in his very public rows with Blaugrana president Josep Maria Bartomeu and sporting director Eric Abidal, and 2020 has not been a vintage year for the six-time Ballon d’Or winner.

Ramos, on the other hand, has been questioned at times this season for his performances. Since lockdown restrictions were lifted and football returned, however, he has been back to his inspirational best.

The Spain captain has five goals in Madrid’s seven matches post-shutdown, including the winning goal from the penalty spot in each of their last two fixtures.

During that period he has also become the defender with the most goals in La Liga history, with his 10 league goals this campaign second only to Karim Benzema among the Blancos squad.

His latest match-winning turn came against Athletic Club on Sunday as Madrid fought hard to secure three points in what was likely to be the toughest of their final five matches of the season.

Though there will be fans who continue to question some of the refereeing decisions that have led to Madrid winning all seven of their matches after the lockdown, there is no doubt that Ramos has been just as key to them being on the cusp of just a second league title since 2012.

As well as his goals, he is the leader of Europe’s meanest defence in terms of goals conceded, with Madrid having shipped just 21 goals in their 34 league matches in 2019-20.

"The individual recognition is second for me,"Ramos said post-match at San Mames. "What matters is that the team get the objectives we want and manage to get the three points in every game we play. Luckily, for the moment, we are getting those results.

"I would have probably played tennis if I were more interested in individual recognition. This is a very beautiful sport, a team sport, and it's very nice to win as a team."

Over in Catalunya, Messi has been waiting for a long time for Barcelona to begin winning consistently as a team rather than relying on their one outstanding individual.

Time and time again Messi has been relied upon to carry the Camp Nou outfit, and though he has done a more than admirable job of doing so domestically, the growing realisation that Barca would not be defending their title over the past fortnight has led to some to consider whether the current squad is beyond help, even from the club’s greatest ever player.

It was heartening then, in the week that Messi pulled out of talks to extend his contract past the end of the 2020-21 season, that Setien’s side put in their best performance of the last month in seeing of Villarreal.

Messi’s decision is understood to be a move designed to build pressure on Bartomeu ahead of the presidential elections in 12 months' time, and given his performance on Sunday evening, Barca fans will remain hopeful that the threat of his departureis nothing more than a threat aimed at the boardroom rather than an act he will eventually go through with.

Deployed by Setien in a new role at the head of a midfield diamond, Messi was at his creative best as he combined superbly with Luis Suarez and Antoine Griezmann ahead of him.

After the sides traded early strikes through a Pau Torres own goal and a close-range Gerard Moreno finish, Messi turned the game in Barca’s favour on the 20th minute.

He chested down a long forward ball before turning and driving goalwards, drawing Villarreal defenders towards him as he went. With space opening up ahead of him, Messi laid in Suarez, who curled a delightful finish into the top corner.

The assist, Messi’s 18th of the Liga season, saw him equal his best ever season for creating league goals, and he only needed to wait until the final moments of the first half to set a new personal best.

This time the much-maligned Griezmann was the recipient, with the France international netting with a delicate chip over Sergio Asenjo after Messi had backheeled the ball into his path.

A late goal from substitute Ansu Fati ensured Barca would take the three points and maintain what little pressure there remains on Real Madrid at the top of the table.

But with the Champions League’s return fast approaching it will have pleased Setien that his new system worked so well against a team who had not lost since football came back; a run which had catapulted the Yellow Submarine into the top-four race.

That Messi was at the heart of it will have been equally satisfying, even if it seems Ramos will come out on top in the battle of the inspirational Clasico captains this season.