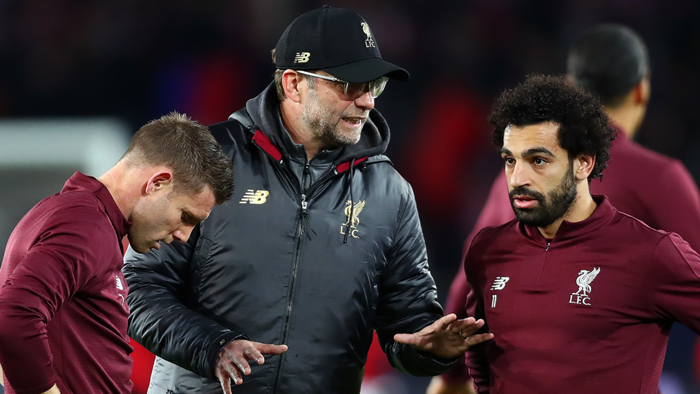 Liverpool midfielder James Milner has revealed the culture shock that the Reds’ players had when Jurgen Klopp took charge, with the intensity of the German’s training formidable.

Klopp claimed the Anfield hotseat from Brendan Rodgers in October 2015 and set in motion a sequence of events that resulted in the Merseyside club winning the Champions League in 2019 followed by the Premier League 12 months later.

Milner admits that training proved to be particularly difficult and that it took players some time to get used to the work that the former Borussia Dortmund coach wanted them to put in.

“To see one of the young lads throwing up on the side of the training field in one of his first training sessions, that sets the tone, you know what you're in for,” he told Sky Sports.

“We had to adapt to that, there were a lot of injuries early on. People were saying, 'You can't do that!' You could, you just had to get used to it. Straight away you saw the tempo and the intensity in that first game at Spurs.

“It was ridiculous really - it wasn't like we had played at a slow tempo under Brendan. That journey started then with the manager's methods and how he wanted us to play.

“You saw it come in bit by bit. One week the quality would be there and the next week we would be miles off it. That was a process again; the consistency started to come in and, eventually, learning how to win ugly and become a more rounded team.”

Milner also admitted that there is a tremendous emphasis on the mental side of the game in training, with Klopp’s methods requiring focus at all times.

“You're reacting to the next situation, always being switched on. If you are doing a shooting drill there might be three balls coming in at once. You might be passing one and a millisecond later there's another one coming at you to shoot,” he explained.

“It's a bit different to anything I've done before, it's based around needing to be switched on at all times in a game. Defensively, as well, it's not training man-for-man or two blocks of four, it is doing two or three jobs at once.”