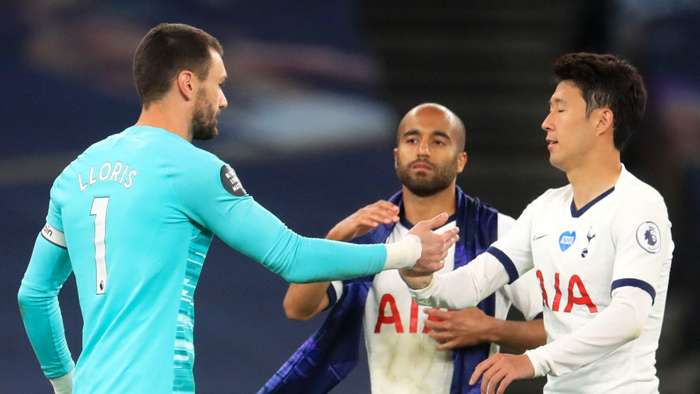 Hugo Lloris says his clash with Heung-min Son at half-time of Tottenham’s win over Everton on Monday was because he was annoyed at the forward’s lack of pressing.

Spurs got back on track with a 1-0 win, as Michael Keane’s first-half own goal proved the highlight of alargely dull match.

With half-time approaching, Richarlison was presented with a chance to equalise, much to captain Lloris’ chagrin.

As the teams walked off, he rushed over to confront Son, with the two players having to be held apart by their team-mates.

The pair made up before the second half and Lloris played the incident down as a flare-up in the heat of the moment.

“It belongs in the changing room,” Lloris told Sky Sports.

“Outside, you can say whatever you want. There is a lot of respect between the players in the changing room.

“What happened between me and Sonny is just something that's part of football sometimes. But there's no problem at all.

“You could see at the end of the game we were more than happy to be part of the team and to have the three points.

“To concede a chance a few seconds before half-time because we don't press properly... yeah, it annoyed me, but it's part of football. We move on.”

Despite the confrontation, Jose Mourinho wasglad to see tempers flaring between his players.

After their 3-1 defeat to Sheffield United, he bemoaned a ‘disturbing’ lack of desire from his team.

This win took them up to eighth, but they still face a battle to catch the likes of Manchester United and Wolves in the European places.

“As I said before, we are in a situation that we need to fight against,” Lloris added.

“We're not happy to be in this position. But the most important thing today is to stay focused on the team and do everything to finish as high as we can.

“I repeat, we can only do it as a team. When you play a season like this one it's very easy to fall apart as a team, to think about disinterest, but today we showed that we are still together and ready to compete and fight until the end.”