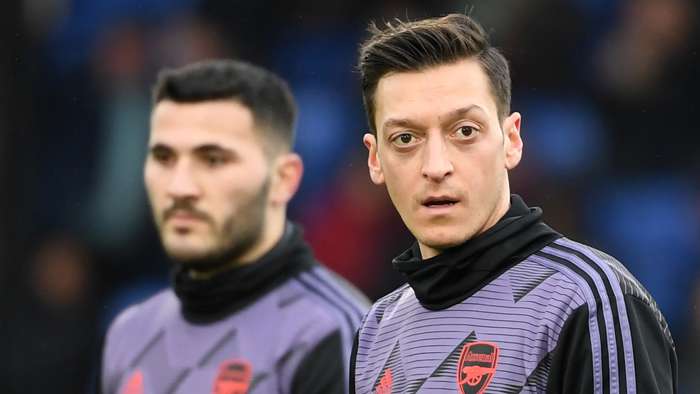 Arsenal loanee Sead Kolasinac has addressed speculation over Mesut Ozil's future while opening up on his return to Schalke.

The 27-year-old began his career at Veltins-Arena in 2012and spent five years inGelsenkirchen before being snapped up by Arsenal.

Schalke were regulars in European competitionwhen he left the club, but they are now in danger of being relegated from the Bundesliga after a nightmarestart to the 2020-21 campaign.

Kolasinac is determined to helpChristian Gross's side beat the dropand has not ruled out the possibility of remaining on the club's books beyond the summer.

Asked if he is open to a potential loan extension, the Bosnia and Herzegovina international old a press conference: "I want to concentrate on this season, the aim is to take as many points as possible.

'We will see about everything else after the season."

Kolasinac was also quizzed on Ozil's current situation at Arsenal, with the German midfielder being strongly linked with a move away from Emirates Stadium after being exiled from the senior squad.

The 31-year-old hasn't played for the Gunners since March and it appears he will not be offered the chance to renew his current contract, which is due to expire in June.

Ozil also started his professional career at Schalke, before going on to play for Werder Bremen and Real Madrid, but Kolasinac is not sure whether heading back to the Bundesliga is on his team-mate's agenda.

"We talked about Schalke, but not about whether he wants to come back too. Hecomes from Gelsenkirchen so Schalke is always a topic," he said of Ozil.

Kolasinac added on how he much he has changed as both a player and person since his first stint at Schalke:"I have developed personally and athletically.

"The Premier League is the best league in the world, there are players in the team who have achieved a lot in their careers.

"I left as a teenager and came back as a family man."